Sally Sleuth is a fourth-grade self-proclaimed detective who solves one mystery after another in this whimsical, fun series. In her first adventures, the class’s pet mice go missing, and it’s up to Sally to return them safe and sound.

The Sally Sleuth Series is a series of stand-alone mystery books for lower graders. They’re ideal for younger readers or reluctant / struggling readers. Each book can be read as a stand-alone. 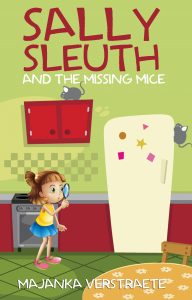