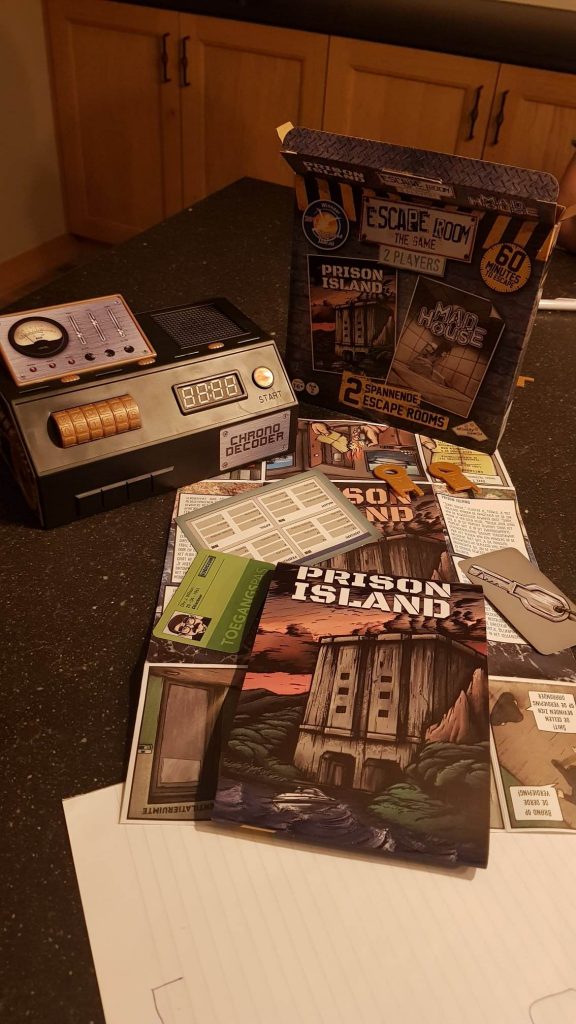 Escape Room The Game is basically an escape room that you can play from the safety of your own living room. No need to go outside, which is perfect for those cold winter nights where you don’t want to head out anyway.

A lot of different editions of this game have been released already, and this particular one, featuring two different escape rooms, “Prison Island” and “Mad House” is designed for 2 players.

The concept is pretty nice. Each scenario consists of a big folded piece of paper that you then have to open for the first part of the adventure. Once you escape from that, you have to open the paper further to reveal part two, and so on. The game is best played with the decoder (which you can find in the original game, and which is shown also on the picture).

I like playing these escape rooms – they last about 60 minutes, sometimes shorter if you manage to break the codes faster – and it’s fun entertainment for a family night. However, with these particular escape rooms, I found the stories rather lacking. The plot is too thin. I don’t need a whole background story for why certain events happen, but I need a bit more than ‘oh, you’re trapped in a prison and need to escape’. Now I know that in normal escape rooms, you don’t get a lot of background either, but here it feels like a missed opportunity as it would allow the reader to feel more invested.

Also, and this happened on both adventures, our decoder was acting up and saying we didn’t have the right keys although we did. We checked against the answers on the website, and we did have the right answers, so that was kind of a bummer.

Despite that, we still had two entertaining evenings with this game, though. The first evening, we played the introduction game, “Kidnapped”, followed by “Prison Island”, and the second night, we tackled “Mad House”.

An original and fun idea for date night, since these are aimed at two players.

If you like puzzles and escape rooms, then I recommend reading…