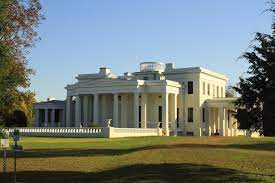 Gaineswood is a plantation house in Demopolis, Alabama. It reportedly took nearly twenty years to build it to completion, and it was finished just before the Civil War – talk about bad timing. Nevertheless, it is the grandest plantation house ever built in Marengo County, and one of the most significant remaining examples of Greek Revival architecture.

Gaineswood was designed and built by General Nathan Bryan Whitfield, who purchased the property from George Gaines. Originally, Whitfield gave his farm the name of Marlmont, but in 1856, he renamed it Gaineswood in honor of Gaines. Several generations of Whitfields lived in the home, until it was sold by them in 1923.

After being used as a private residence for a few more years, it was purchased by the State of Alabame in 1969. In 1973, it was placed on the National Register of Historic Places, and currently it is being operated as a historic house museum.

Allegedly, the property is being haunted by the ghost of a young woman, who either died while on a visit to the plantation or worked as a nanny in the Gaineswood Plantation, depending on which version of the story is being told. If you hear piano music throughout the house, then you can blame the ghost. According to the version of the story that appeard in Kathryn Tucker Windham’s “13 Alabama Ghosts and Jeffrey“, a young lady named Evelyn Carter came to Gaineswood after the death of Nathan Bryan Whitfield’s first wife. She came to help with household chores and to take care of the young children. She was musically talented, and entertained the family on numerous occasisons. Unfortunately, one winter’s day, she became ill and died. Prior to her death, she had requested for her body to be taken back up north to Virginia, but due to the bad weather, this was not possible. Mr. Whitfield had the body stored in a pine casket underneath the home until spring arrived and it could be shipped back to Virginia. This was not that uncomon back in the day, but this apparently caused Mrs. Carter’s spirit to become restless and start haunting the house.

Gaineswood is certainly worth a visit, even if you’ren ot in it for the ghosts. The house itself is extraordinary, with unique architectural elements such as a domed ceiling in the parlor and the dining rool, vis-a-vis mirrors in the drawing room, and ornate plasterwork, cast iron and carved wood decorating the interior.