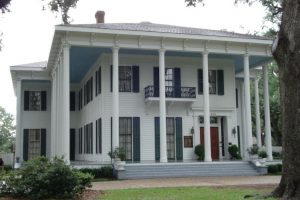 The Bragg-Mitchell Mansion, with massive double parlors and a majestic circular staircase, is one of the most-photographed buildings in Mobile, Alabama. The house was built in 1855, and is a perfect example of Greek Revival architecture that was popular in that era. The mansion was built on request of Judge John Bragg.

During the Civil War, all the live oak trees on the property were cut to give the Confederate defenders of Mobile free range to shell any approaching Union troops. All the furnishings from the mansion were removed during the war and transported to Bragg’s plantation in Lowndes Country. Ironically, that plantation was later burnt down, whereas Mobile itself never became a battleground during the Civil War, contrary to all expectations.

John Bragg died in Mobile on 10 August 1878 and was interred in Magnolia Cemetery.

The Bragg-Mitchell Mansion remained in the Bragg family until 1880. It was then bought by William H. Pratt. The property passed through several families – Upham, Davis, Wingate – before it was purchased by A.S. Mitchell. The Mitchell’s lived in the house until 1965. The mansion was then abandoned for several years, and it was placed on the National Register of Historic Places in 1972. It was opened to the public in 1987.

The ghosts occupying this impressive mansion include a ghostly cat, and a ghost with some type of allergy, because he or she is constantly sneezing. On top of that, you also have the run-down-the-mill signs of an ordinary haunting: doors opening and closing, disembodied voices, … The most peculiar ghost of the mansion though, is the woman who can be seen staring out of the upstairs window.

Nowadays, it is a museum offering guided historic tours. You can visit the website if you’d like to join a tour, and possibly get a view on the ghosts roaming about in the timeless halls of the Bragg-Mitchell Mansion.