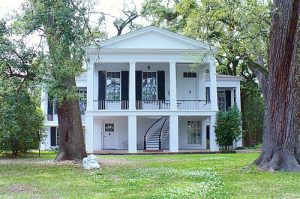 Oakleigh is a historical house turned museum that is located in Mobile, Alabama. It is the centerpiece of the Oakleigh Historic Complex, a group of buildings that contain a cottage, Union barracks, and an archives building.

In 1833, James W. Roper, a brick mason, dry goods merchant and cotton factor, built Oakleigh. During the building phase of the house, Roper unfortunately lost his fire wife and a child. He remarried in 1838 after the completion of Oakleigh, to Eliza Ann Simison. The couple had four children.

Roper fell upon even more bad luck, as he could not pay back his loans, and Oakleigh was repossessed by the bank. Roper’s brother-in-law, Boyd Simison, bought Oakleigh back and allowed Roper and his family to live rent-free in the home until 1850.

The house was purchased in 1852 by Alfred Irwin, a treasurer of the Mobile & Ohio Railroad. During the Civil War, Irwin’s wife, Margaret Kilshaw Irwin, defended the home against Union soldiers by proclaiming the house to be neutral territory based on the fact she was a British citizen. Irwin’s sons were both veterans of the Civil War and gained local prominence in the late 19th century. Oakleigh remained in the Irwin family until it was sold in 1916.

The front parlor room of Oakleigh House is reportedly haunted by a female ghost. There have been reports of poltergeist-like activity around the mansion, such as disembodied voices, furniture that moves on its own, and so on. The ghost is nicknamed “Miss Daisy”, and there have also been reports of a male figure in a tail coat roaming about.