For years, and in any case since 2014, a photograph has been distributed online of a bunch of young men finding a corpse after a party in the catacombs of Odessa, Ukraine. The photograph is used to illustrate the dangers of urban exploration.

The corpse allegedly belongs to a girl who went missing in the catacombs.

The legend goes that in 2005, a group of teenagers headed out on New Year’s Eve to a party that was held in the Odessa catacombs. Note to self: never host a party in the catacombs, since that has ‘stupid idea’ written all over it.

One of the girls at the party (according to the story, she was called Masha), became drunk and went to do a little exporing and unfortunately got seperated from the group.

The other teens stopped looking for her after a while, figuring she was already out of the catacombs or would find the exist soon.

For three days, Masha wandered around in total darkness with no food or water. The catacombs were cold and dry.

She eventually perished, likely from dehydration or from hypothermia.

When Masha didn’t show up, the police were called, but they never located her or her body inside of the catacombs. 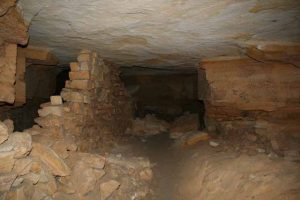 A few months later, a group of explorers stumbled upon the body in the catacombs – hence the photograph. I will not share it here completely because it is quite gruesome, but you can take a look here. The body seemed to be partially mummified. The deceased wore jeans and modern shoes. The explorers who found the body snapped a picture, presumably to prove to the police that they actually made this discovery. Noteworthy is that the boys in the picture look quite young.

Either way, they took the picture to the police, but thep olice was still reluctant to get involved because the catacombs were notorious for getting lost in, and the body was located a good many miles from the entrance.

The photograph was uploaded to internet, and the story took on a life of its own from there. People began to take the story as fact, believing a young girl called Masha had actually gone missing, and these explorers had stumbled upon her remains.

But was it all true? Or is it just an urban legend?

There is little to no record of a girl named Masha ever disappearing into the catacombs. However, presumably a fresh body was indeed found in the catacombs, and the body was removed around 2004-2005.

A medical examination was done on the body, but it was in terrible condition, so there were no good identifying factors left. A boy had been reported missing in the area, called Janis Stendzenieks, the son of a local newspaper magnate. But the DNA of the body didn’t match that of the missing boy – the DNA belonged to a missing girl, but she was never identified.

While the girl may not have been named Masha, and the story of a New Year’s Eve party gone wrong might not be true, fact is that the catacombs, and in particular the Odessa Catacombs, are dangerous places you should stay far away from, especially if you do not have a proper guide with you.

Other missing persons in the Odessa catacombs

In January 2012, a 22-year-old student who trekked into the Odessa catacombs disappeared. A search was organized but already a few days later, officials announced they had to call off the search again. He was never located.

In February 2021, the remains of a man, with a backpack beside him, were found in the catacombs. While his identity remains unknown, he presumably disappeared about six years ago.

In March of 2021, the remains of another man were located within the Odessa catacombs. He was 26 years old.

Whether the legend of Masha is true or not, fact remains that people often go missing in the Odessa catacombs, and that these catacombs are terrifying and you should definitely never enter them alone, or without a proper guide.