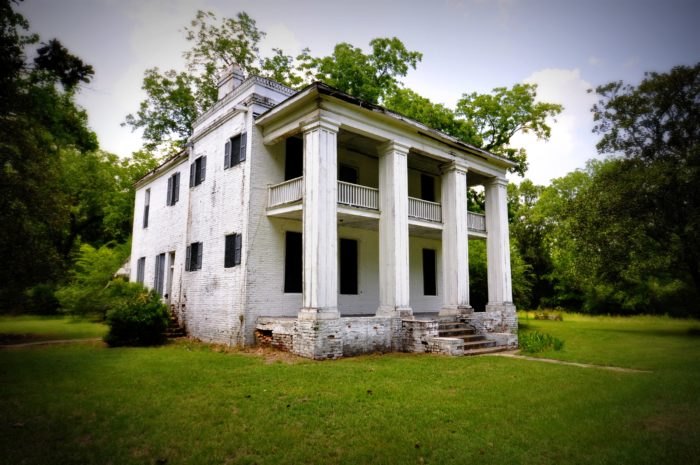 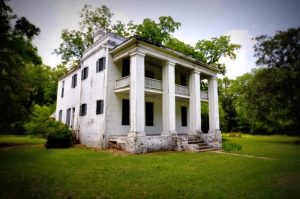 In the Old Cahawba Park between Selma and Orville in Alabama, you can find a lot of intriguing stuff, ranging from archeological finds, a gothic-style church, remnants of strane wells, the foundations of a prison camp, to the remnants of the Barker’s Slave Quarters. It is certainly an interesting plave to visit, being a de facto ghost town, so if you’re in the area, definitely check this out.

Built in 1860 by Stephen Barker behind his large brick mansion, the original building was two stories high but did not have the columns that you can see featured in the picture. After the Civil Wat, Samuel McGurdy Kirkpatrick purchased the Barker mansion and its outlying structures, including the Barker’s Slave Quarters.

The Barker mansion burned down in 1935. One of the grandsons of Samuel Kirkpatrick renovated the Barker’s Slave Quarters by adding the columns and a whole new wing. But even the Kirkpatricks had to leave the town several decades later, and as of 1989, the town is officially a Ghost Town.

It’s hard to find more information about who is supposed to be haunting the Barker’s Slave Quarters, but according to paranormal investigators who have checked out the site, it certainly is haunted. Reports include a ball rolling across the floor on its own accord. Pretty spooky, if you ask me. However, there’s an even more famous ghost running around in Old Cahawba, namely Pegue’s ghost, which is some sort of will-o’-the-wisp, at least based upon the accounts of those who reportedly saw this ghost.

Nowadays, like the rest of the town, all that remains of Barker’s Slave Quarters and the nearby slave burial grounds, where the last person was buried in 1957, are ruins.

You can find out more about Old Cahawba here.