On June 16, 2009, the body of Peter Bergmann was discovered near the rocks of Rosses Point Beach in Sligo County in Ireland.

Investigation revealed that the body belonged to Peter Bergmann, or rather the man who had been known under this alias in Sligo, as it turned out that this wasn’t the man’s real name.

From the moment Peter Bergmann’s body was found, we’ve always had more questions than answers. We don’t know the man’s real name, where he originated from, how he died, why he died, or what he was even doing in Sligo.

The mystery bears a lot of resemblance to the Taman Shud case, also dubbed the “Somerton man”, who was discovered at Somerton Beach in Adelaide, Australia in 1948 and whose identity was never uncovered either.

On June 12, 2009, Bergmann (we will continue to refer to him as such throughout this article) arrived in Sligo. He arrived at the bus station at about 6:28pm that evening. He called a taxi and asked the driver to take him somewhere inexpensive.

The driver described Bergmann as being about 60 years old, tall and thin, with grey hair and a pair of glasses. He spoke with a German or Austrian accent.

The driver dropped Bergmann off at the Sligo City Hotel on Quay Street, where he booked a room for three nights and paid in cash. Bergmann wrote his name – which then turned out to be fake – on his reservation form, and gave an address in Vienna, Austria. He did not provide any identification, but he was not requested to do so either.

The next few days 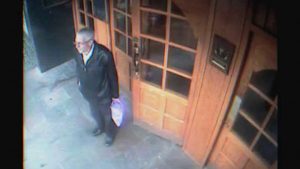 Bergmann stayed in room 705. He went out a few times during his stay, carrying a purple plastic shopping bag. But when he returned, he did not have the bag with him anymore.

This strange process was repeated a total of 13 times during his stay, according to the Irish Times. However, there’s no CCTV footage anywhere that can shed light on what Bergmann was doing with the bag after he left the hotel. No items were ever found that could be traced back to Bergmann either.

While we cannot retrace his exact steps in the few days he stayed in Sligo, we do know that on June 13, 2009 he went to the post office at 10:49 am and bought eight stamps and airmail stickers. On Sunday June 14, 2009 he entered a taxi and asked the driver to bring him to a quiet beach. The taxi driver bought him to Rosses Point, where Bergmann only stayed briefly.

On June 15, 2009, Bergmann left the hotel he was staying in at around 1pm, carrying with him his purple bag and a laptop-style bag. This time around, it is believed he walked instead of taking a taxi. At the station, he ate a capuccino and sandwich. He purchased a one-way ticket at about 2:40pm when he entered the bus.

He debarked when the buss reached Rosses Point.

Passersby spotted Bergmann on the beach in Rosses Point for a while, at 4pm, 5pm, all the way up until 11:50pm. Every time witnesses saw him, they noticed he was pacing around, carrying the plastic bag.

The next morning, his body was found by local Arthur Kinsella. Strangely enough, he left most of his clothing on the shore, folded and stacked in a neat little pile. All the labels were removed from his clothing. He wore a navy blue T-shirt, swimsuit, underwear on top of the swimsuit, and a wristwatch.

The purple shopping bag was missing, as were his glasses, the stamps he had purchased on Saturday and the black laptop bag.

The post-mortem examination revealed that Bergmann was in the late stages of prostate cancer. According to the examinor, Bergmann had only weeks left – at most. He only had one kidney, the other presumably having been removed in the past.

Curiously enough, there was no medication in his system, not even an aspirine, although this was found in his pockets. Given that he was probably in a lot of pain due to his illnesses, it is peculiar that he was not on pain medication.

There were no signs of drowning at all, which was the initial cause of death that had been assumed. According to the post-mortem, Bergmann died from an acute cardiac arrest.

When police tried to inform Bergmann’s family about what happened, they discovered that the address he had given on his registration form did not exist, and that Peter Bergmann was a false name.

All that remains are questions

Peter Bergmann was buried on September 18, 2009 in the cemetery in Sligo. No relatives ever came to reclaim his remains or stepped forward.

Police believe that Bergmann’s actions were intentional – that he came to Sligo with the intent of taking his own life after having settled his affairs. Posting letters, disposing of belongings, all seem to indicate that, indeed. It is speculated that the reason why he died of cardiac arrest rather than drowning was the shock his already frail body experienced when walking into the water.

If you want to know more, there is a video / documentary that was made about this case.

Peter Bergmann was an alias used by a man who did really arrive in Sligo, stayed a few days, and passed away on the night of June 15 to June 19 of 2009.

However, who he really is, where he originates from, and why he spent the final days of his life in Sligo, remains a mystery to this day. It is unlikely, after all this time, that we will ever discover more about Bergmann’s history.

We can only hope that anyone who knew him – family, relatives, friends – knows what happened to him, and are not still out there, looking for him.