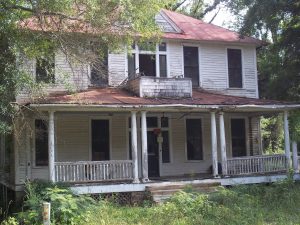 Built in 1863, the Old Shelby Hotel, formerly known as the Dannemora Hotel was located next to the Shelby Iron Works. The hotel was a popular weekend destination for the public, but the employees of the Iron Works also used it as a boarding house. It was the first hotel in Alabama that could offer electricity and internal plumbing to its guests.

The Union Army destroyed the Shelby Iron Works in a raid in 1865 (considering they were supplying iron to the Confederate Navy). The hotel survived but burned down a few decades later, in 1898. By that time, the Iron Works reopened and were quickly capitalizing on the growing industrial demand. The owners rebuilt the hotel in 1900 on the original brick foundation. The new hotel was called the New Dannemora Hotel and later renamed the Shelby Hotel.

The last owners of the Shelby Hotel were Mr. and Mrs. Rummel. They operated the hotel from 1956 until its closing in the 1970s. It is Mrs. Rummel who is supposedly haunting the old Shelby Hotel. Some passersby have smelled her cooking, perhaps still prepping meals even in the afterlife, and some have even claimed to have heard her voice.