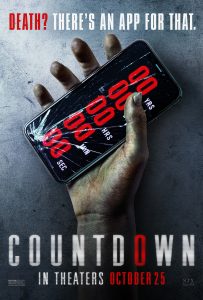 Countdown is actually a rather fun horror movie, with an unique spin on an all-too-familiar story.

At a party, a bunch of teenagers downloads an app called “Countdown”. This app supposedly predicts when the user will die. While most of the teens at the party get fifty years or more on their countdown, Courtney only gets a few hours to live. Spooked by the app’s predictions, she doesn’t get into the car of her drunken boyfriend; Evan.

She walks home, but is stalked by a creepy presence, and subsequently murdered in a rather bizarre fashion. At the same time of Courtney’s murder, her boyfriend crashes his car.

He later wakes up in the hospital, where he is treated by the main character, nurse Quinn Harris. Evan tells Quinn about the app, and how he only has a few hours to live – right up until his surgery. Quinn initially brushes it off as superstition, but when Evan dies at the exact moment predicted by the app, Quinn grows increasingly more scared.

Especially because she downloaded the app too, and her life expectancy is just a few days.

Can she escape her predicted death day?

While the movie isn’t necessarily scary, it sure is entertaining. Quinn doesn’t take her impeding death lightly, and she tries to do whatever she can to stop this from happening. She’s also quick to believe in the power of the app – thank goodness, because sometimes, protagonists in horror movies seem keen to turn a blind eye even when a ghost is literally screaming at them.

The movie has some flaws, though. The villain is rather one-dimensional, and the plot is a little thin in some points. There are enough plot holes that it starts looking like expensive cheese. It never really hits the amount of scary you would hope for in a horror movie, and the twists turn out to be rather predictable.

But despite that, it’s still entertaining, and definitely worth the watch.