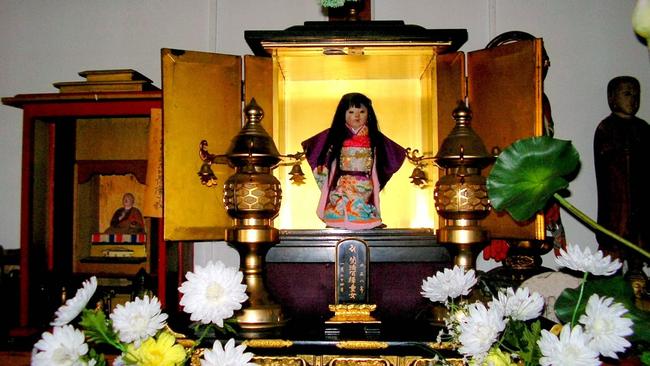 While most stories of Haunted Dolls we have featured so far in this series originate from the United States, today’s story comes from the other corner of the world: Japan.

As the story goes, this doll was bought by a 17-year-old boy called Eikichi Suzuki in 1918. He intended to give the doll to his 2-year-old sister, who was called Okiku. The doll was about 40 cms tall, and dressed in a traditional kimono. It had raven black hair cut in an ‘okappa’ hair style (meaning cropped around the jawline, with a short fringe over the forehead).

When Suzuki gave the doll to his little sister, she loved the doll right away and began playing with it all the time. She even called the doll ‘Okiku’, giving it her own name.

However, just a year later, in 1919 tragedy struck and the real, human Okiku died from yellow fever. According to the legend, she was clutching the doll when she died.

After her passing, her family – as is common in Japan – added the doll to the family’s shrine as a way to commemorate their deceased daughter.

The first strange thing they noticed about the doll was her hair growing. It had at first been shoulder-length, but was now significantly longer. Lights started flicking on and off on their own account. Strange noises echoed through the halls of their home. The family contacted local priests, who told them that their daughter’s soul was trapped inside the doll, and was the source of all these strange phenomena.

In 1938, the family relocated to a different district and they approached the local temple and asked them to take care of Okiku – the doll, that is. The priests have been taking care of Okiku ever since, and they have verified some of the family’s claims, in particular the claim that Okiku’s hair does grow. They sent samples of the hair for scientific analysis, which allegedly proved that Okiku’s hair was that of a human child, although I’m taking that with a grain of salt – it is probably as much part of the legend as the whole origin story of Okiku.

Does Okiku’s hair grow or not? If you want to see the doll with the growing hair for yourself, then you can visit Okiku at the Mannenji Temple in Hokkaido.