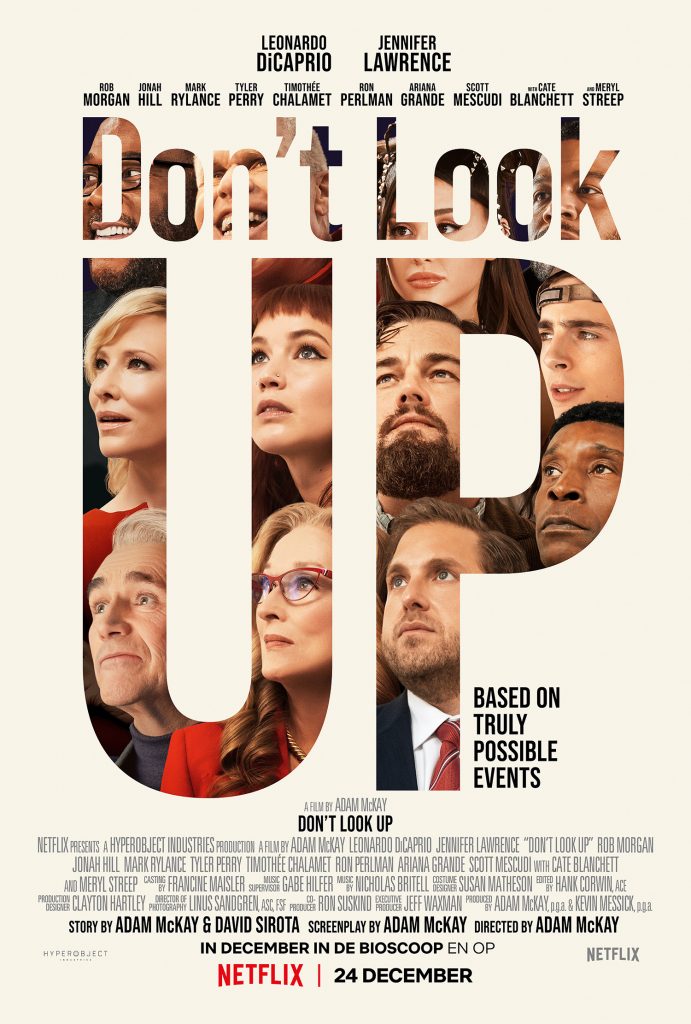 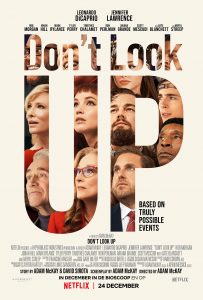 Don’t Look Up is a science-fiction comedy / drama that features a lot of big names: Leonardo DiCaprio, Jonah Hill, Jennifer Lawrence, and Meryl Streep are just a few names that are on the impressive list of stars featured in this movie.

Leonardo DiCaprio plays Dr. Mindy, a low-level astronomer from Michigan. Dr. Mindy’s assistant, Kate Dibiasky, discovers a comet one night, and initially the team is excited about their find. That is, until Dr. Mindy starts running the numbers and discovers that the comet is heading straight for planet earth. Impact will hit in just over six months.

Dr. Mindy is desperate to inform the rest of the world, so that someone somewhere can do something about it. One of the initial audiences for the news of Dr. Mindy and his colleagues concerning Comet Dibiasky is the President of the United States (played by Meryl Streep), who happens to be female in this movie version. Unfortunately, she does not do much better than her real-life counterparts, and she happens to be the worst president imaginable, caring only about elections and money, rather than the fact the entire world is going to meet their end soon. Jonah Hill plays the chief of staff, and coincidentally, the son of the president, but he’s not exactly a catch either. Caring only about material wealth, he’s very shallow and superficial.

That is the tragedy presented here in Don’t Look Up. Not the fact that a comet is heading straight for our planet, because we can avoid this tragic fate: the U.S. military has several options to take out the comet or at least drastically reduces its size, and other countries with space programs could also launch a similar mission. Yet, the tragedy isn’t the comet heading here to kill us.

The tragedy is that no one cares.

Dr. Mindy and Dibiasky talk on a morning show about the comet heading for earth, yet the ratings soar when a teen pop star discuss her break-up and consequent getting-back-together. The internet has a laugh about Dibiasky’s meltdown on TV where she yells what we should all be doing: we’re going to die if no one does anything.

But no one cares.

And that is the real tragedy of today’s society. Don’t Look Up drips acid in the wound to show to us loud and clear that we’re in a capitalist society, where material gain of a few triumph over the good of many, and where a lot of people are willing to believe in those not worthy to believe in. Where words are hollow and grand speeches are given while behind the curtains, opposite decisions are made. And where the good of the planet, again and again, is pushed to the back for material gain.

It’s a strong commentary and the movie does it rather well. It feels one leaving exhausted, worried and ill-at-ease, because the scenario is just too plausible not to be chilling.