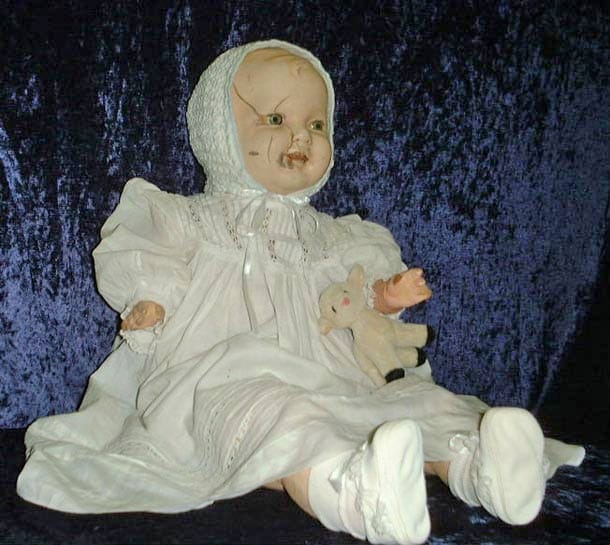 It’s been a long time since I wrote an article in this series, but after watching an episode of the TV show / podcast “Lore” that features the infamous Robert The Doll, who was the protagonist of an article on Haunted Dolls I wrote a while back, I decided to dive into the world of haunted dolls some more and find out if there are any other famous haunted dolls.

Turns out that mankind’s favorite toy is often the source of terror. The same is the case of the most popular haunted doll of Canada: Mandy.

Photo from the Quesnel Museum Archives

Now if there’s one doll that fits the bill of how to look scary and unsettling, it’s certainly Mandy. With her cracked face and eerie smile, she certainly looks haunting.

According to the website of the Quesnel Museum, where Mandy has spent the last decades of her life, Mandy was donated to the museum in 1991 and she’s close to a 100 years old. The person who donated Mandy to the museum had received the doll from her grandmother, but complained that the doll was giving her a weird feeling, so she donated it.

Before long, the museum staff started to report strange occurrences in Mandy’s presence. As you can see in the picture, Mandy is holding a stuffed lamb. Allegedly, this lam was once found outside the locked cage where Mandy was being kept in.

Many people who visit the museum swear that Mandy’s eyes seem to follow them everywhere. Some people complain of their electrical equipment (like cameras, phones, etc.) malfunctioning in Mandy’s presence.

A story often circulated on the internet, but likely not true since it is not featured on the Quesnel Museum website and reads a little like an urban legend, is that the previous owner gave Mandy away because she began waking up in the middle of the night to the sounds of a baby crying. Except there was no baby in the house. The strange crying allegedly stopped after Mandy moved to the museum.

Personally, looking at pictures of Mandy makes me feel sad more than scared. There’s a profound sadness that can creep up on you when looking at this doll, that is perhaps even more haunting than any type of scary story.

Anyway, if you want to know the truth about Mandy being haunted or not, your best bet is to visit the Quesnel Museum if you’re ever in the neighborhood. Maybe she’ll give you the same strange, unsettling feeling as she has given many visitors before…