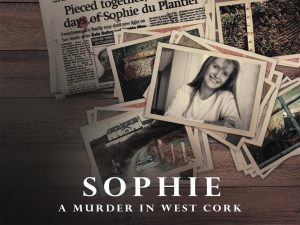 True crime is hotter than hot nowadays, and it shows looking at the enormous amount of true crime limited series Netflix has released in the past year or so.

Sophie: A Murder in West Cork is one of the better series in this genre. Atmospheric and haunting, the limited series starts by introducing us to the victim. Sophie. A brilliant, vibrant young woman with an artistic side, who enjoyed being on her own in her holiday home in Cork, Ireland. Being a writer and enjoying solitude, especially the kind of complete and utter solitude that comes from living in the middle of nowhere, surrounded by nature – wild, unpredictable nature – it was easy for me to understand what Sophie was looking for when going to her holiday home on her own.

Unfortunately, on Sophie’s last trip to her holiday home, just before Christmas of 1996, she was brutally murdered at the once idyllic location. She was found the next day by her nextdoor neighbour who promptly alerted the Gardai, the local police.

The town would never be the same again.

The parts of the documentary that focus on Sophie provide a fascinating blend of emotions. On the one hand, they make it easy for us to connect to Sophie, and to see her as more than a murder victim. She was a mother. A spouse. A person with obviously a lot of depth and personality, who enjoyed the quietness of nature. On the other hand, some parts of the documentary are downright eerie: the mention of the specter Sophie witnessed hours before her death at Three Head Castle for example, sent chills down my spine. The description of the crime scene was horrifying in a raw, no-nonsense kind of way.

Those are the parts where the documentary is at its strongest: showing a horrific crime but also having respect for its victim.

Unfortunately, the narrative then switches and focuses mainly on the number one suspect, Ian Bailey. Ian Bailey was a local reporter at the time, and lived in the close vicinity of Sophie (as close as possible in this desolate area) with his then-partner, Jules Thomas. The police investigation soon pointed in the direction of Ian Bailey but despite arresting him twice, the Gardai were not able to make a firm case against him due to the evidence being mostly circumstancial.

While the investigation stalled in Ireland, in France the family of Sophie put pressure on the justice system until they were able to put the case before the Court of Assises, where the court then condemned Ian Bailey in absentia to a punishment of  years in prison. However, the Irish courts have declined to extradite Ian Bailey thus far and the family is still struggling for justice for Sophie.

Ian Bailey never formally confessed to the crime, although some of the locals mentioned he confessed the matter to them (and they made statements in this regard to the police), and everyone should be considered innocent until guilty. Still, the Netflix documentary spends a lot of time focused on Ian. He participates in the documentary, providing commentary and answering questions, and he has more screen time than anyone else featured in the documentary, including the one person whom this should all be about: Sophie.

It is frustrating that the Netflix documentary seemingly follows the narrow path followed by the Gardai, one that inevitably leads directly to Ian Bailey without uncovering potential further avenues. Because if the majority of your evidence is based on a witness seeing Ian near the crime scene (but in the opposite direction of his home…) in the dead of night, with no idea if Sophie was already murdered or not by that timeframe, and said witness then later on retracts her statements, you have a flimsy case at best. Witness statements are notoriously unreliable even if there is no retraction of the statement, especially if the witness saw a person at night, did not know the identity of this person at first, and so on.

Crucial evidence such as a large gate went missing from the crime scene, and the investigation focused far too soon on Ian Bailey. That’s not to say he didn’t do it, and there are some damning elements against him, but I keep to the ancient saying of ‘innocent until proven guilty’.

While not a bad true crime documentary per se, it is rather unfortunate that the majority of screen time is focused on Ian Bailey – who clearly enjoys the spotlight, whether he has committed this crime or not – rather than focusing on the victim. Often times when dealing with murder, the victim seems to be forgotten; an after-thought, and this is unfortunate.

Some of the final words during the documentary came from Sophie’s son, who mentioned that his mother feels very present in the holiday home where she spent her final hours, which gave me chills because I believe him. Just looking at the house that she carefully picked out despite it being isolated, at the peculiar circumstances leading up to Sophie’s death, I can truly believe that his mother’s presence still lingers in that house, and I hope it gives him some comfort at least.