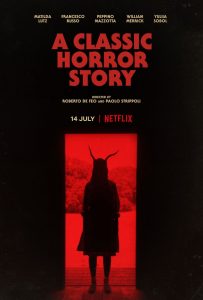 Five carpoolers get into an accident when a dead animal carcass shows up in the middle of the road during the dead of night. When they wake up, they find themselves in the middle of nowhere, surrounded by a dense forest and near a cabin that looks derelict and creepy. The cabin alleges to an ancient legend that is apparently well-known in Italy, relating to the three knights, three men who ages ago wrote a new code of ethics based on honor and silence – the basis for the most well-known maffia collaborations in Italy: the Cosa Nostra, ‘Ndrangheta and Camorra.

If the plot rings familiar, that’s because it is. Strangers stranded in the middle of nowhere, surrounded by a cult / family intent on killing them is the plot of basically every slasher/gore/horror movie since Texas Chainsaw Massacre. Sometimes you get a movie that goes beyond that, and does so in an extraordinary fashion, really turning the genre upside down, like The Cabin in the Woods.

Well, this is no The Cabin in the Woods.

The plot is a continuation of loose threads, none of them really leading anywhere. The majority of the characters are rather hateful individuals, and it’s impossible to feel a connection to them. Even the main character is a bland, one-dimensional character with as only meaningful trait the fact that she’s pregnant.

The twists are so predictable that you can already spot them early on – I will not give out spoilers here, but let’s just say it was fairly obvious who would betray who. Adding the maffia in the mix only served to add an extra layer of confusion: an attempt to be meta that ultimately failed. The social commentary at the end is simply ridiculous. Sure, I agree we live in a self-obsessed world where people are glued to their phones, but that scene would never occur in real life that way. Never.

Then, once the credits roll, we get another meta layer like a cherry added on top of an already overstuffed pie: someone is viewing a movie on ‘Bloodflix’, an obvious wink to ‘Netflix’, skips the majority of the movie and then gives a thumbs down. If the intention is to imply this person is watching a snuff movie, the costs of which were so high that people actually have to die, and still rates it a thumbs down because he doesn’t care,… well, it’s not entirely clear, and if that is the intention, it certainly doesn’t pack a punch.

If you’re looking for a movie that will make you shudder, A Classic Horror Story obviously isn’t it. The movie, for all its attempts, never enters into the scary-territory. It’s not even eerie or unsettling, just absurd, and it desperately tries to be something that it isn’t.