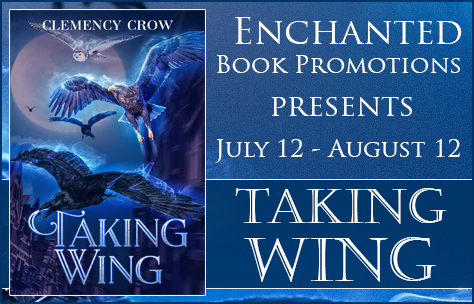 I’ve always loved writing, but I never considered putting my work out there until two years ago. My sister, Virginia, published her first book. It was a HUGE event, filled with fun, and I started thinking “hmmm, I wonder if my stories have anything to offer.”

Two years later and Taking Wing has been received by its target audience with heart-warming praise and enthusiasm, so I am very grateful to everyone who encouraged my along the way.

My writing has progressed from a 7 year old’s tale about mammoths into a 26 year old’s adventure story about birds. Still keeping along the animal-y theme, I think it’s fair to say that I find nature an inspiration too!

“Taking Wing” is the first book in a trilogy which follows the same main characters – the goodies and the baddies! Although the overarching storyline follows through the series, all three books have their individual plot. This gives each book a satisfactory ending, while encouraging you to read more. In “Taking Wing”, the characters are desperately trying to win peace after a centuries-long war. They achieve this in the end, but at an unfortunate cost.

My aim for this book was to get children thinking in grey, instead of black and white. It’s aimed towards 10-13 year olds and is a transition from middle grade to young adult literature.

Taking Wing challenges people’s perceptions of birds and nature. Ravens, instead of being ruthless pets of evil witches, are highly intelligent and sensitive creatures. Owls, rather than being cute sidekicks for goodies, are cat-like killers. This approach was inspired by Cressida Cowell’s ‘How to Train Your Dragon’ series, which also encourages children not to tar everything with the same brush.

Taking Wing also has a darker side to it – a gritty get-your-teeth-into adventure that has you holding your breath when you don’t even realise. Kids love this, and adults will also enjoy the twisty-turny plot.

In the year 617 AD, Raedwald killed Aethelfrith. At least, so it says in the Anglo-Saxon Chronicles. I’ve no idea what either of these Anglo-Saxon kings were like but they are the only two in my story who were real people. Of course, it’s so long ago, I hope they don’t mind what I’ve turned them into!

The other characters are a mixture of my imagination and people I’ve met before. Freya, for example, is a mixture between myself, my sisters and the children in my first class. This method of character planning creates a multi-faceted, wonderfully complicated individual that seems so real. On the surface, she is the least complicated of them all, but it soon becomes apparent that this is not the case.

Seriously consider going the Indie way, if you have enough time and funds to promote yourself.

While I have occasionally entered writing competitions, I have never submitted my work to a publisher or agent. The only reason for this is because I wanted most of the creative freedom. I didn’t want to conform to what the publisher wanted, although I was happy to accept advice from my editor, which leads me onto my next point…

The meaner your editor, the better. They are going to be one of the first people to read your book. Whatever they say will probably be echoed in the public’s opinion of your work. You really want your editor to give their honest feedback and opinion on everything. The alternative is to leave yourself open to heaps of abuse from book reviewers.

Lastly, keep writing, and always remember why you want to be an author.

12-year-old Freya enjoys karate and is the only one in her class who’s trusted with a part-time job. But everything changes when she meets a boy with yellow eyes. She learns about the guardians, and how an age-old fight has stopped them from fulfilling their purpose. Freya finds new friends in the crow tribe but not everything in the castle is blissful. A destructive shadow lies within her and all she needs to do to summon it is close her eyes. But as the guardian’s war rages on, Freya realises that, although the shadow’s power can be useful, it can’t create peace. Freya and her friends must solve the crime that began the war, but can they bring the guardians together before they destroy each other?

I can’t remember when I wrote my first story. We had a word processor when I was very little. It was an archaic piece of technology with no mouse, which meant you had to know the codes for it to work. My sister, Judith, and I wrote several stories using this. I think one of my stories was about a mammoth, probably during my I-want-to-be-a-mammoth-when-I-grow-up stage.

When I was a bit older, during Year 3 at Primary School, another sister brought home several A5 grey jotters and gave one to Ginny and Judith to plan and write their stories in. Naturally, I wanted a notebook too, so I said I was writing a story called “The Rule of the Unicorns”. I never finished that rather peculiar tale, but it meant I got one of those A5 grey jotters!

A good few years down the line and I’m a Primary Teacher in the tip-top north of Scotland. To encourage a love of reading in my pupils, I write a story with them in for their Christmas present. The first thing they do is flick through and try and find their name – but I hope they enjoy the story too!

When I’m not teaching, I love writing, working on my allotment and I’m crazy enough to be doing a Science degree at the same time.