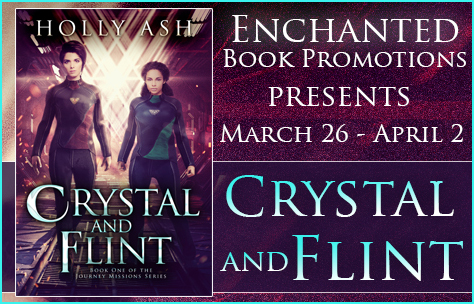 I’ve always enjoyed writing and have been doing it for as long as I can remember, though it was always just a hobby. I decided to get serious about my writing about three years ago. My son had just turned 2 years old and I realized that I hadn’t written anything since before he was born and it really bothered me. I decided that night that something had to change. I wanted to set a good example and show my kids that through hard work and determination you can achieve your dreams. I set up a writing routine and haven’t stopped since then, though I did slow down a little when I was pregnant with my daughter last year. I try to involve my kids when I can. There’s been several times when I’m writing at my computer and my son is standing on the chair behind me drawing on my white board while I write, though I tend to do most of my writing once the kids are in bed.

Crystal and Flint is the first book in a five book series. Each book will cover one of the team’s missions. The second book in the series, Family Binds, will be released this summer.

Most military based science fiction takes place in outer space where humans are fighting some kind of alien race. Crystal and Flint is different in that it takes place on a single planet and most of the action occurs underwater in submarines and underwater colonies. It also differs in the fact the most of the characters are from the planet Neophia which has been colonized by humans prior to the start of this series. So from the perspective of Crystal and the other Neophian natives the humans are the alien race.

4) Are any of your characters based on real-life people?

Sort of. Crystal and Desi were first created for fan fiction I wrote with a friend in middle school for the 90s TV show SeaQuest. For me anyway, Crystal was a version of myself that I wanted to be. She had changed as a character a lot since then but there are certainly still aspects of myself in her. For Desi, I think she is inspired by my friend since they are both tough, smart, confident women.

Find what works for you and stick with it. Your process doesn’t have to look like anyone else. That goes for how you write or story or how you publish it. I know there are some authors that can put out three or four books a year. I can’t do that and that’s ok. There are authors who write great first drafts that need very little editing. That’s great, but again it doesn’t work for me. My first drafts are really rough and it takes me several rounds of editing and rewriting to get my stories where I want them to be. That’s what works for me, but that doesn’t mean it will work for you. I would tell aspiring authors not to compare themselves to other authors, especially those who have been publishing for a while and have a good handle on what works for them. Whatever your process is, is the right way for you. The only thing that matters is telling your story, not how you get it on the page.

It’s been 300 years since humans arrived on Neophia and the planet’s intelligent species have yet to agree on how much influence humans and their advanced technology should have on the planet.  With the threat of war hanging in the air, Lieutenant Commander Crystal Wolf races to finish construction of the mega submarine, Journey, in order to calm political tensions on Neophia and cement her already stellar military career.

Lieutenant Desiree Flint never dreamed she would leave Earth to serve on Neophia, but with the end of her military career in sight she doesn’t see a way around it. Determined to rebuild her reputation on Neophia, no matter the cost, she sets her sights on dethroning Commander Wolf in order to prove her own superiority.

When Journey is attacked by someone from Crystal’s past, the two women must find a way to work together to save the ship, liberate an underwater colony from an oppressive government, and prevent a war.

Holly Ash is the author of the underwater science fiction series The Journey Missions. She has worked for the last ten years as an Environmental Engineer after receiving degrees in Environmental Science and English Literature from Central Michigan University. Holly lives in the metro Detroit area with her husband and two tiny people who constantly want her to do things for them.

Holly is also a member of The Cabin in the Woods Association of writers which works to help indie authors get their books seen.