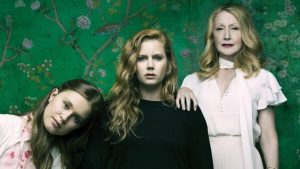 Sharp Objects is, hands down, one of the best series I’ve ever seen on TV. I can’t believe I missed it when it was first released, and I’ve only picked up on it now when scrolling through the offerings of HBO out of sheer boredom on a lazy Friday evening. The premise sounded intriguing, and the cover image looked a little off, reminding me of gothic horror, my all-time favorite genre, so I hit the “play” button. Eight-hours of binge-watching the series whenever I could, and I was at the final scenes, engulfed in a story so enthralling, so deranged that it can only be compared to that other gem of a series, The Haunting of Hill House, that was also released last year.

But whereas the latter is more horror-focused, the horror moments in Sharp Objects are rarer. Still, when they happen, they have a profound impact. Pictures of the heavily-mutilated corpses of young girls randomly appearing after zooming in on the heroine’s face, showing us she is thinking about these horrific events, it certainly leaves a mark. Or when the main character’s deceased sister shows up with harrowing messages, or sometimes just pops up sitting on the couch in her parental home, doing absolutely nothing except creating more tension and increasing the creep-factor.

I’ve just finished watching and I already want to watch it again to uncover what I’ve missed – that’s how good this series is.

Now, on to the plot. Camille Preaker is a reporter who moves to St. Louis in an attempt to get as far away from her home town, the claustrophobically small town of Wind Gap. The viewer uncovers soon enough that Camille is not well: that something in her past must’ve scarred her. The only question remains as to what it is that scarred her so much that she’s now a broken, barely functioning individual. Then, her editor suggests for her to go back to Wind Gap, back to her past, and this because of a recent murder in the town, and a missing person’s case, both involving young girls. Camille is more than a little reluctant, but eventually complies and heads back to Wind Gap, on a trip down memory lane.

Soon after, we meet Camille’s mother, Adora, who resembles every wicked stepmother in every gothic horror novel you’ve ever read. Cold, somewhat out of her mind, overdramatizing everything, and still suffering from the loss of her precious daughter Marian years ago. Now we uncover part of what is haunting Camille: the death of her sister, Marian, who she clearly was close with, as the viewer learns through various flashbacks. After the weirdest “welcome home” in history, Adora invites Camille to stay with her while she’s in Wind Gap, in the sprawling mansion that used to be Camille’s family home. After going up on the strangest staircase I’ve ever seen (seriously, was no one else wondering why they didn’t just open up the right side too, so Camille’s room could be immediately accessed as opposed to taking that enormous detour?) Camille goes back into her old childhood room, and becomes plagued with visions of Marian.

Then, there’s also Amma, Camille’s younger stepsister, who is immediately “too” fond of Camille, awkwardly so. It soon turns out there’s more to Amma than meets the eye, and she’s far from the dressed-up doll her mother wants her to be. Amma is somewhat of a contradiction: one moment she is dressed like a ten-year-old playing with her dollhouse and making a fuss when the colors of a rug don’t match, the next moment she’s rollerskating around town with two other girls, dressed provocatively, hanging around with boys and even doing drugs.

There’s a sense of desolation, a sense of something being off, but you can’t quite put your finger on what it is yet. Camille roams around town trying to solve the murders – as it soon turns out, victim number two was murdered as well, and her body was staged in the middle of town rather than on a remote location. Camille is a bad reporter, there’s no way around it. She runs into several conflicts of interests, barely noticing them, she even walks into the bedroom of one of the murdered girls, uninvited, and then writes about it. She drinks all day and night, hiding her pain behind bottles of liquor, and she sleeps around. She’s wounded; it’s easy to see, easy to feel for her, but sometimes you just want her to man up and take control of the situation.

Especially toward the end. I don’t want to give out spoilers, but for God’s sake, I wished Camille wasn’t such a pushover then. Because for all her bravado, when it comes to the relationship with her mother, Camille is a pushover. She doesn’t fight, she doesn’t rebel, she doesn’t attack: she lets things happen to her. And that’s basically the story of Camille’s life: she’s let things happen to her, and some of those things were absolutely horrible, and some she may never recover from. But she never transforms into the hero viewers may want her to be: even when she needed to take action the most, even when she could have triumphed over her mother after all this time, she doesn’t. And perhaps this is more realistic, perhaps a victim doesn’t always end up strong enough to face what happened to them head-on, but it’s sad to see that Camille’s wounds have crippled her to this point.

From the get-go, the story portrays females in various different lights. The detectives conclude soon enough that the killer could not be a woman because of the ferocity of the crimes, and the series then continues on to show just how vicious women can be. The men play only supporting roles here: even the detectives on the case, both men, don’t come anywhere near closing the case. They’re deluded from the start, focused on an idea that is absurd although they don’t see it themselves. Alan, Adora’s husband, is the prime example of this: he does whatever Adora says, whenever she says it.

The focus is on the women here: on Camille, scarred by the past; on Adora, a controverse mix of caring mother and hurtful serpent whispering hateful words to Camille such as “I never loved you”; and Amma who is unbalanced, one moment a doll, one moment a real girl. It’s these relationships, these characters, that carry the story. It’s not even about the murdered girls or the murders as such: it’s a gothic horror about a family with secrets hidden in the dark, about guilt haunting one’s conscience, about princesses locked away in towers of mansions.

And even though I somewhat predicted the ending, I was still amazed by its execution, by the sheer force of it and the impact it had on me.

It’s dark, it’s depressing, it reminds you of just how wicked people can be, but at the same time, it’s magnificent, it digs into your skin, it doesn’t let you go. Once you’ve started watching, you won’t be able to stop.