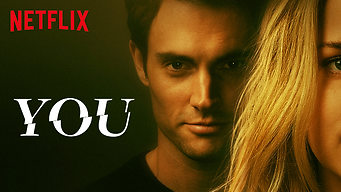 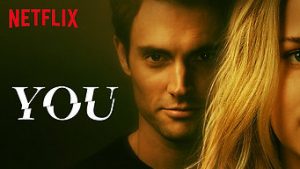 I never expected Netflix would drop so many chilling thrillers around the Christmas season, but since I’m a huge fan of the genre, I say: the more, the merrier. “You” is the story of boy meets girl, boy falls in love with girl and woes her, and girl eventually falls in love with boy. Except that in this case, the boy is a stalker, possibly a psychopath, and maybe even worse.

Joe is a bookstore manager who meets a girl in his bookstore one day, Guinevere Beck, and seems to fall head over heels from her. The story is told mostly from Joe’s POV, and we can even hear Joe’s mental voice, which is a cool addition and works rather well. Joe is interested in Beck and determined to find out more about her, which entails that he follows her around all day without her knowing, stalks her on social media, and eventually steals her phone in order to find out everything there is to know about her.

Then, his delusions get even more out of control as he starts to imagine the obstacles standing in the way of him and Beck being together: Beck’s ex-boyfriend who is still waltzing in and out of her life, Benji, being one of them. Joe starts to believe it’s up to him to better Beck’s life, even if that means getting rid of some of these obstacles…

What “You” is exceptionally good at, is blurring the lines. As viewer, you start out by thinking Joe is maybe a little stalkerish/obsessive, but he seems otherwise as a nice guy: he helps his neighbor’s kid, Paco, whose stepfather is often abusive to his mother, he’s always perfectly charming,… But at the same time, his obsessive nature is creepy. Still, you start hoping this might go away once he actually gets the object of his obsession: Beck. And when they’re together, the series gets the vibe of a rom-com. They’re actualloy quite good together. Joe is a doting boyfriend who helps Beck with her writing career. Beck is better when she’s with Joe – he brings out the best in her.

But Joe is still an obsessive stalker, potentially much worse than that, and instintively, you know it’s not going to end well.

The thing is, though… How much of it is really Joe’s fault? And you know that when you start thinking like that, the plot writers and actors have done a really good job.

Beck doesn’t deserve Joe, in some ways. When he’s charming and nice, she doesn’t deserve it because she leaves him when it’s convenient for her, she dumps him and then wants to get back together with him, she cheats on him and makes him believe he was being delusional when he confronted her. And Joe, good guy Joe, is willing to forgive all that…If only he wasn’t so damned psycho, he might actually make a good boyfriend. If only.

What really makes “You” stand out is how it dances the blurry line of good and bad. Joe insists his intentions are good, and he only does it because he loves Beck, while we know that’s just an excuse. Love and obsession. When you start watching this, it becomes a blur for you as well, that’s how well this is portrayed here.