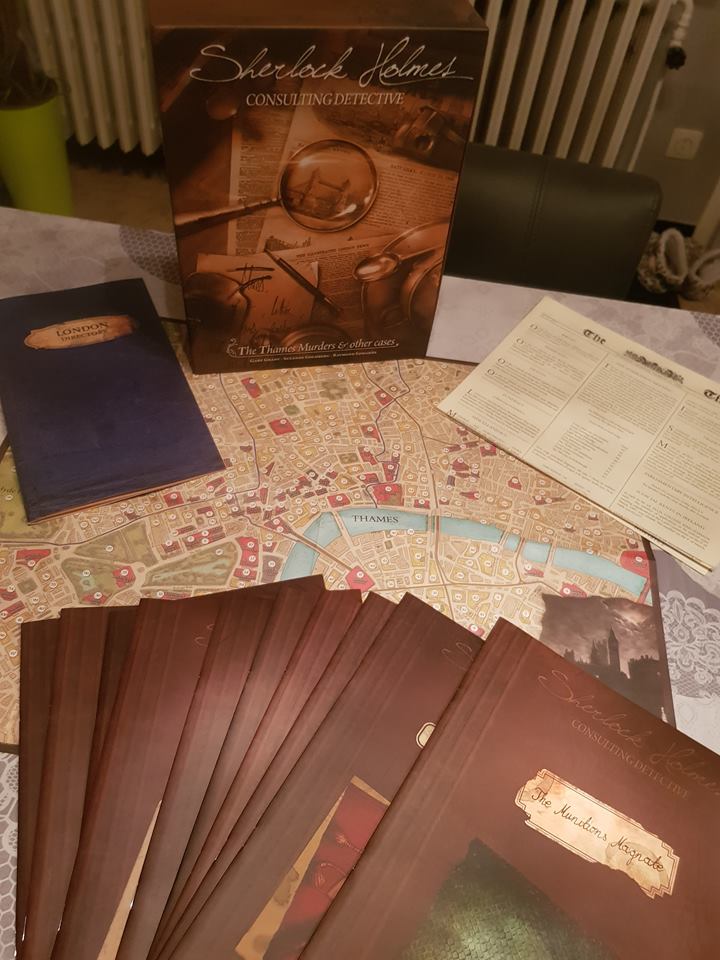 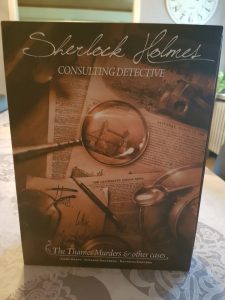 Yes, that’s a thing. Yes, it exists. No, I had no idea it did, or I would’ve bought it years ago.

There’s no better way to get in the mood to write the next book in The Adventures of Marisol Holmes Series, than play a Sherlock Holmes-themed board game. Since I spent half of the Christmas holidays editing the previous book, The Sign of the Serpent, and am now in full-on drafting modus for the next book, The Wolf of the Baskervilles, this board game was ideal to put me in the right mood.

Even better, it’s an excellent board game for anyone who has ever dreamed of being a consulting detective. In the game, you are a member of the illustrious Baker Street Irregulars, who act as assistants for Sherlock Holmes. When a new case turns up – and there are twelve cases in the box – you have to solve it, preferably before Sherlock Holmes does, or he’ll laugh again at how slow and dim-witted you are. 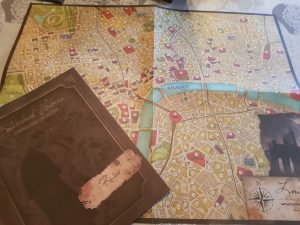 You get a map of London, which helps you to track down certain locations and travelling time. Yes, this is one of the few mystery board games where you can actually rule out suspects based on how long it would take them to get to the crime scene! That’s one of the aspects of this that I enjoyed the most, so far. 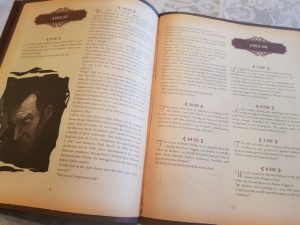 You also get a book specifically for this case,which is filled with clues and background stories.

Then, as you read up about the case, you decide what to do. Do you want to visit the crime scene? Talk to a witness? Go to the coroner’s, or the police precinct for more information? It’s all your choice. There’s no set way you need to begin: just follow your intuition, and think like Holmes. 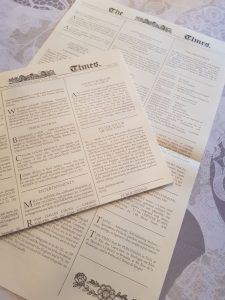 My downright favorite part of the game however, is the newspaper articles. For each case, you get access to the newspaper of the day, and you can also consult all previous newspapers for any clues. The articles in the newspapers are so much, and some seemingly-unrelated information can still prove very useful.

When it comes to gameplay, the game is pretty easy and straight-forward. However, the mysteries themselves are not always cut-and-clear, and you have to pay a lot of attention to detail. There are ten mysteries included in the game, each with their own casebook. 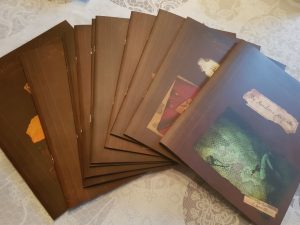 Once you uncover the mystery, you write down the answers to several questions Holmes asks. Then, you can compare your answers to those of Sherlock, and the clues you checked based on those Sherlock checked. Here comes the one downside to the game, however. Sometimes, Holmes barely checks any clues, making it impossible for him to answer the additional questions asked – he only solves the core mystery: who’s done it? But the extra questions, he doesn’t solve. However, if you check more clues than Holmes did, you get points deducted for that. And if you’re thorough like me and want to follow every single lead, no matter how small or insignificant, just so you can be absolutely 100% positive you’ve got the right culprit, then that adds up to a lot of points being deducted, just for being thorough. 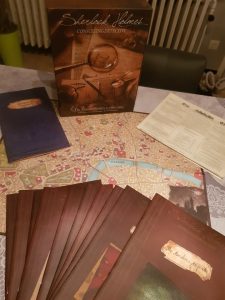 Still, even despite that, the game is a lot of fun. The game really makes you feel like a detective, as you follow lead after lead. However, while the game states it can be played by 1-8 players, I would suggest keeping the number small, maybe 2-3 at most. Else, it could be tedious to argue which lead to follow and to settle on a common solution to the mystery. But for a smaller amount of players, it’s perfect!