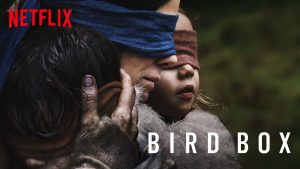 If you’ve been anywhere near the internet for the past few weeks, then you’ve no doubt come across “Bird Box”, the new Netflix thriller featuring Sandra Bullock. It’s an internet sensation, and has even stirred a new challenge for people to go outside blindfolded and try to find their way in the dark, something I heavily do not recommend and which even Netflix has stated in an official press release is a bad idea.

With all the hype, I was expecting great things when I tuned in on a dreary Saturday afternoon to watch this movie. The end result is not bad, but it’s a far cry from the so-called sensation this movie is supposed to be. The horror is supposed to be super-creepy but is in fact barely any level of creepy. We never see the horror itself; all we see is second-handed, people looking at the strange creatures harolding the apocalypse, and suddenly wanting to kill themselves, some of them mumbling about deceased loved ones. They run into traffic, hit their heads against concrete, whatever it takes to kill themselves, so it must be pretty devastating.

But we never see the true horror, and it’s a bit of a let-down. Also a let-down is that some people, namely the majority of those locked up in mental institutions prior to the world going to hell, can also see the creatures but they don’t end up killing themselves. In fact, they seem to worship these creatures and do their bidding.

Part of the movie takes place in the past, when the apocalypse hits. Heavily-pregnant Malorie (Sandra Bullock) sees her sister committing suicide right in front of her, and narrowly escape the same fate by barricading herself in a nearby house, along with several others. The group of ‘survivors’ is, as you come to expect when you watch this genre often, a variable mix: an old woman, a police officer in training, a junkie of some sorts, an angry old guy with a gun, the friendly house owner welcoming these strangers in his home, a construction worker who Malorie bonds with instantly, and of course, Malorie.

The other part of the movie, set five years later, features Malorie with two children in tow, conveniently called “Boy” and “Girl”, who walk around a forest blind-folded and then peddle around a river, also blind-folded. If you can’t see these creatures, they can’t kill you, but that doesn’t mean a thousand other things can’t (like drowning, the people working for said evil creatures, you name it).

The narrative switches between past and present, and that’s a good choice for the pacing. Sandra Bullock plays her role extraordinarily well, portraying a woman almost stripped from her humanity but with enough shreds of it left to hang on.

Still, to call this movie the best horror movie of the year, or the best post-apocalyptic movie ever, is a far, far stretch. It’s not even really horror, in my opinion. It is post-apocalyptic, and it has some nice concepts like how you can’t see the creatures but they do end up killing people, but some other concepts are just strange. Like, why do mentally unstable people not die when they see these horrors, but rather worship them? It just seems odd and a bit stigmatizing. And the character behavior is predictable: even during their time at the house, all characters behaved exactly like I imagined they would.

The movie is a good, sometimes even compelling, but it brings nothing new to the table, and doesn’t live up to the hype. It’s definitely a solid choice for a night of movie entertainment, and the actors all give a decent performance, but this movie isn’t likely to give you much chills.