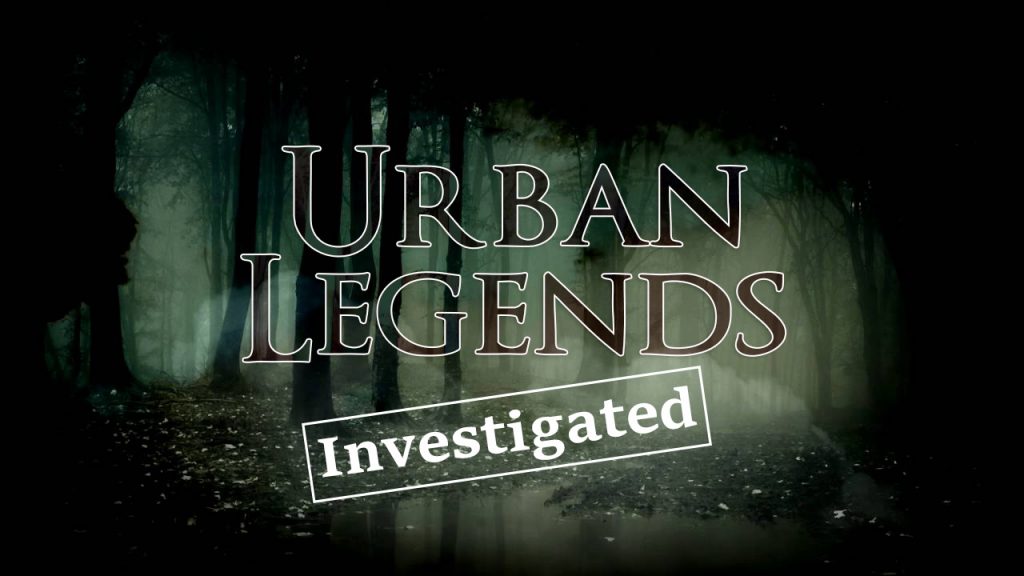 Dear David is one of the latest Urban Legends of the internet, and one of the creepiest to date. It’s creepy for the sheer fact… it might all be true. 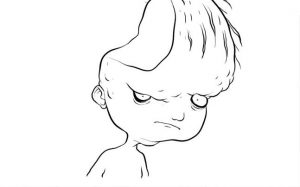 By now, a documentary is being made, as well as a movie, about the “Dear David” story, and the Twitterer who started it all, comic book artist Adam Ellis, has over 500k+ new subscribers to his account because of the ghostly happenings in his apartment, which he detailed on Twitter. Along with pictures, videos, you name it – and trust me, this stuff is legitimely spooky.

For the full account of all Adam Ellis’ tweets about this, please check out his account or the page he made with a run-down of all the events so far. In my opinion, it’s easier to read on the page.

Here’s a short rundown of what happened, so far. On August 7, 2017, Adam Ellis posted for the first time that he believed his apartment was haunted by a dead child. The first time Adam saw him was during an episode of sleep paralysis, while the child was sitting in a green rocking chair at the end of Adam’s bed. The child has a huge misshapen head, dented on one side, as if he’d been hurt in an accident.

David appeared a few more times in Adam’s dreams, explaining more about how he died. Adam looks for clues online about deaths in the city that could match with David, or different names with a D-, but doesn’t find anything that could explain this. Adam gets a chance to move into a different apartment, because the one on the level above his becomes vacant, and he moves.

A few months go by, and he forgets about David. And then… his cats start gathering at his front door, exactly at midnight, just staring at it, like something is on the other side.

Adam even has a few pictures to back it up.

For the past 4 nights, my cats gather at the front door at exactly midnight & just stare at it, almost like something is on the other side. pic.twitter.com/Y8nnVLv6b4

Those cats are indeed behaving like someone or something is on the other side. My cats have weird behavior like this too, sometimes, though–like when a bug is crawling on the other side, or they just hear a weird noise. Still, slightly creepy.

If what he’s saying is true, and the pictures seem to allign with his statements, then his cats did this for six nights in a row, by August 9. I would at least consider if I had a burglar or not.

And judging by the video Adam made on August 9, it really seems as if something or someone is on the other side of that door.

What is going on? pic.twitter.com/30mLSqYhXo

I don’t really trust humans, but I trust cats, and that cat is on to something. Next up, Adam takes some pictures with the door open, and later on through the peephole, revealing a weird smudge on the other side of his apartment door.

I wasn’t sure if it was a smudge or something so I took a second photo from inside. There was something out there. pic.twitter.com/NnHepK90aC

My suggestions at this point would be: call Ghostbusters and/or Sam and Dean and ask them to come over ASAP.

Adam continues to make recordings with an app of the sounds in his apartment at night. He records, among other thins, a single footstep (although he didn’t get out of bed all night), and at some point, records a weird electric sound between 2-3 AM.

After a weekend on holiday, Adam returns to the apartment having bought a polaroid camera. He snaps shots of his apartment, and all of them look okay, all except for the hallway. The hallway is pitch-black.

If this were me, I’d be calling an exorcist by now, and oh yeah, moving the heck out of there.

The cats keep on with their strange behavior at midnight, i neach picture of the hallway, it turns out pitch-black, and Adam records himself sleeping for weeks in a row, and always at around 2-3 AM electric static pops up on the sound app.

On August 21, things get worse. Adam dreams about David dragging him along to an abandoned warehouse. Next, he wakes up with a bruise on his arm, and when going out for coffee, finds a nextdoor warehouse completely empty – a place he was confident was bristling just days before.

The cats move their routine to around 10 PM, sitting at the door for fifteen minutes, howling for another fifteen, and then acting completely normal. On top of that, after the cat stuff, Adam starts getting phonecalls, always at around 10:30 PM. When he picked up, he heard a static sound – kind of like the sound the sleep app picks up on between 2-3 AM.

Then, because he’s going to Japan in a few weeks, Adam bought a pet-cam, because he wanted to keep an eye on the cats while he was abroad. Honestly, with a ghost running loose in my condo, I wouldn’t go anywhere without taking my pets with me, end of story. Still, when Adam tests the pet-cam, all seems to be fine, until the cam catches…

A rocking chair moving on its own – rocking back and forth.

Not just any chair, but the exact same one David was rocking in the first night Adam saw him.

Time to get rid of that chair, Adam. Let’s sell it, throw it away, maybe even burn it. Either way, GET RID OF IT.

In the next video, a turtle shell drops from the wall, that’s been up there for ages. Ghost alert, we have a problem here.

Also, when your cat starts doing this (behavior they usually portray when a predator is around, to appear larger), get them out of there.

Specifically, it recorded Maxwell doing this on and off for hours. pic.twitter.com/bTUKy64d5g

The next few weeks, Adam is plagued by nightmares. Anyway, Adam goes away on his Japan trip and LUCKILY, David doesn’t come for his cats while he’s not home. hank God. I wouldn’t go on a trip and leave my cats alone with an otherwordly fiend, I’ll tell you that.

After his trip, things seem peaceful at Adam’s house, but not for long. The blacklight on his TV acts weird – turning itself and off although that’s not possible. Then, he hears faint scratching coming from the front door, and takes a picture of it through the keyhole.

Anyway, Adam finally decides it’s time to do something about this. So, he invites a friend to do some “cleansing stuff”. Cryptic, I’ll tell you that. Some mediums and ghost hunters apparently reached out as wlel, but Adam didn’t want to sensationalize things (only slightly odd since there’s now a documentary about “Dear David”, but whatever).

Things stay quiet for about a week, then Adam notices a figure staring at him from the rooftop of the buidling next door. Adam keeps getting creepy dreams involving David, and even tries to take pictures in his dreams which, surprisingly, seems to work.

November 7 is the day it’s all going down, starting with this horrible picture.

There’s a child sitting in that chair, or a creepy-ass doll, but it’s creepy as hell, all right.

That doll is on the move, y’all. I would start running by now. Or start praying.

Then, miraculously, after already living in his apartment for months, Adam only now discovers a hatch in the hallway. While, he certainly doesn’t get points for being perceptive, does he? And after discovering the hatch, he starts hearing noise from the “empty space” above his apartment – aka, the attic.

Debris tumbles from the hatch one night, which as opened up (partially) in a mysterious way. My recommendation: do not go on that attic. Do not even try to use a pole to poke around on that attic.

What does Adam do? He grabs a pole to poke around on that attic. Poking around, something drops from the attic.

Adam calls the landlord, who comes over to investigate, and who finds nothing on the attic. Nothing, besides a marble.

Still weird, slightly less creepy, he should’ve gotten out of there a long time ago.

Adam is quiet for a while, letting readers believe that maybe things calmed down. When he comes back, he says he hasn’t been feeling great. Who would, with a child’s ghost haunting your apartment?

Then, Adam wakes up one night with a bad feeling. Same thing occurs the next night. Adam gets the brilliant idea to download an app that automatically takes picture every few seconds.

The first few pictures are normal – Adam asleep in his bedroom (although, his room looks pretty weird from the start, why is there something behind the wall?).

Then, in the next picture, David appears, standing on the chair across from Adam, in his bedroom.

David is standing on top of Adam’s bed, staring down at him sleeping.

Time to call an exorcist, I’d say. Or maybe burn down the entire apartment.

Adam moves home to Montana for a while around Christmas to visit his family, but David follows him and even leaves footprints in the snow. Tsk, tsk, naughty David.

When Adam returns back home, David is back too. Watching him sleep, crawling on top of him at night.

Then, Adam tells his readers he’s started to lose time. He feels great otherwise (which is weird, considering he’s being stalked by a somewhat-homicidal ghost child) but just… loses time.

Yeah, I know horror movie material when I see it.

Next tweets are weird, because Adam says he feels fine. Then, he’s been quiet because he’s been focusing on work, and nothing strange has happened (back in March).

Uhu, uhu. You can’t tell me you get that much activity and then nothing. I don’t buy that.

All is quiet on the “Dear David” front until June 6, when Adam tweets a documentary will be produced about Dear David.

Come on, Adam, you can’t just let us hanging like that. You have a great build up and an amazing story, and then it just… vanishes?

Somehow I don’t believe that. Somehow, I think David will come back… with a vengeance.

(Stay tuned for my second post in this series, where I will debunk some of the things stated by Adam in his “Dear David” story on Twitter, and where we’ll investigate whether or not “Dear David” is real….)