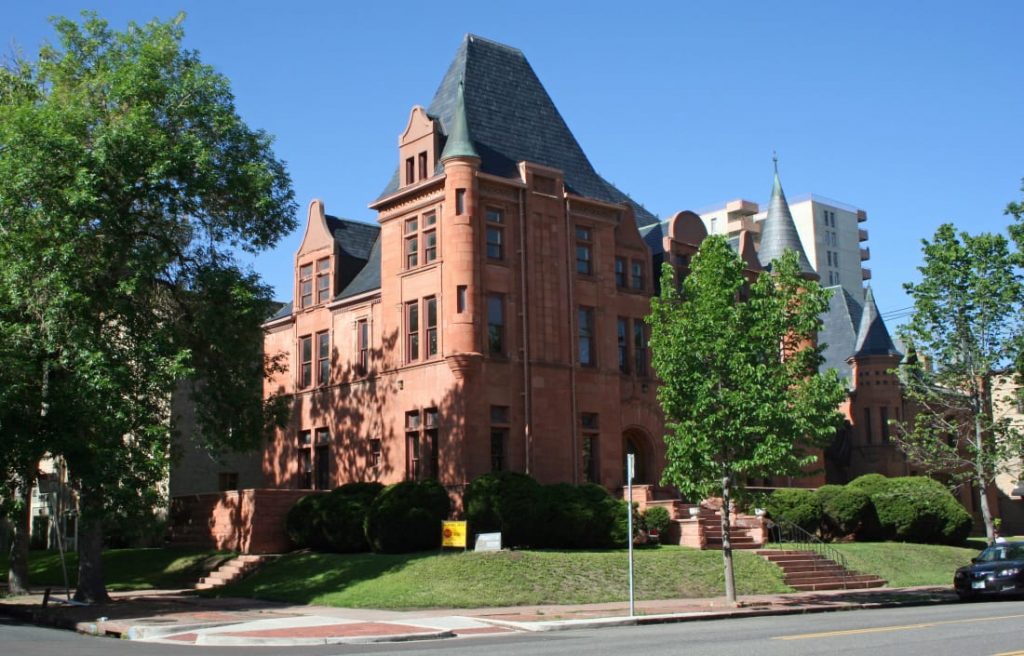 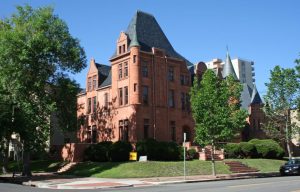 The Croke-Patterson Mansion can be found at 420 E. Eleventh Avenue in Denver. Today, it’s a hotel, but it was home to Senator Thomas Macdonald Patterson once. The house looks pretty much like a castle, but apart from an architectural marble, it’s supposedly very haunted as well.

The first owner of the mansion was Thomas Croke. Born in 1846 to Irish immigrants in Magnolia, Wisconsin, he moved to Denver in 1874 with several younger siblings. He took a job as a clerk in a store, but quickly rose up in the ranks, becoming manager in the store. Through a partnership with Daniels & Fisher, Croke opened up his own store, Thomas B. Croke & Co. The carpet store earned Thomas a lot of money – enough to build a mansion.

In December 1890, Croke requested a permit to build a home on East Eleventh Avenue. It would be a chateau-style structure with gables and turrents, meant to mimic Château d’Azay-le-Rideau, a sixteenth-century French castle. “Chateauesque style” this was called, and the castle eventually boasted three stories and a basement. It had a massive grand staircase, a library, and ornate fireplaces throughout. There were at least five bedrooms, and several other rooms for servants.

Unfortunately, Croke’s wife died before they moved into the mansion. Thomas Croke did move there with his two young children and his parents, but when his mother also died, Croke decided to sell the property he had taken so long to build, after living in it for only six months. Croke much preferred the ranch he owned north of Denver, so he traded the house to Thomas Patterson in exchange for additional ranchland.

After the trade, Thomas Patterson moved into the house. Patterson was born in Ireland in 1839, and came to the United States with his family when he was just ten years old. He worked as a jeweler and printer in his father’s business. He studied at university to become a lawyer, and eventually passed the bar in 1867.

Patterson wanted the Croke mansion because he thought it would be more fitting for his new standing in the community. After a few years of living in the house, Patterson’s daughter Margaret got married to a man named Richard Campbell, osn of a newspaper publisher. The Campbells lived in the home as well, with three children of their own. They shared a house with the Pattersons until 1924 when Richard Campbell had saved enough money to buy a more modern mansion for his wife and children.

They bought a house at 909 York Street, but unfortunately didn’t live in it very long. Margaret died in 1929, and Richard died in February 1930.

After those tragic events, the Croke-Patterson Mansion was sold numerous times, turned into a school, apartments, and eventually turned into a bed-and-breakfast by the latest owner, director and architect Brian Higgins. The renovation work uncovered ancient artifacts, such as children’s clothing, old newspapers and toys, but the crew soon complained about ghostly visits from children, disembodied voices, and frequent temperature drops.

The house is now a bed-and-breakfast and also offers tours. Rates can be found here. If you want to see photos from the inside, you can see them here. In particular, the grand staircase shown on is definitely worth taking a look at.

As if the impressive architecture and setting is not sufficient to convince you to go fo a visit, the mansion is also supposedly haunted. Most of the occurences focus on the renovation crew hired by Brian Higgins to renovate hte property – no haunting claims dated back to the time the Pattersons lived in the house can be found. Perhaps whatever haunts the property, is from a later date – the house was a boarding school at some point after the time the Pattersons lived in it, for example.

Equipment would go missing, tasks completed the day before were undone, and the crew often heard voices when no one was around. When a séance was supposedly held to determine who was haunting the property, the spirit told them it was the spirit of a young girl whose body was entombed in the cellar. When the basement was excavated, they did find a hidden chamber covered with sea sand… but no remains of a little girl. Even though, admittingly, a chamber covered with sea sand is pretty odd either way.

If you want to figure out if the house is haunted or not, maybe spend a night at the Bed and Breakfast… and then decide for yourself.