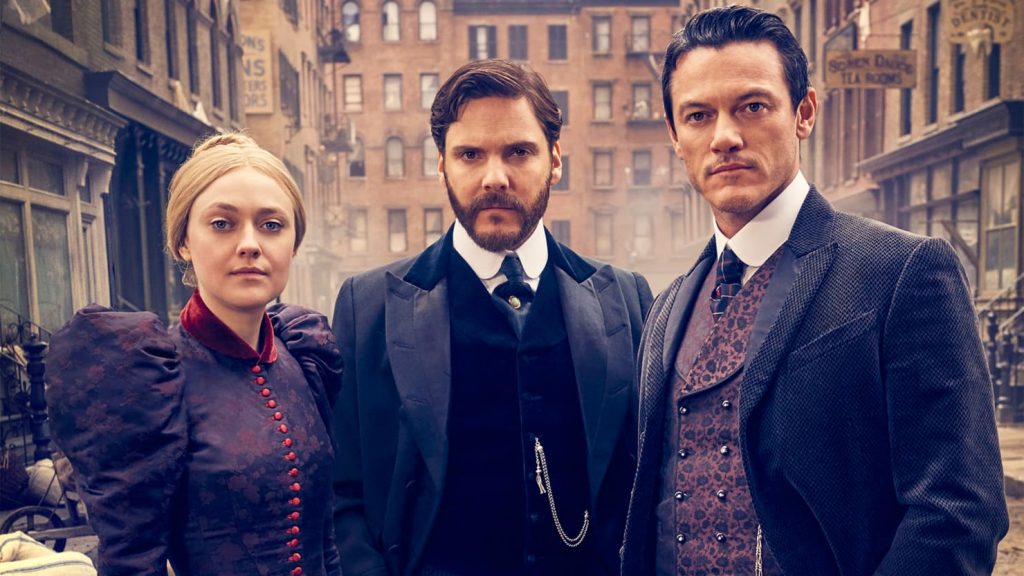 “The Alienist” is a mix of Jack The Ripper with Sherlock Holmes, and even has some remnants from Penny Dreadful. The atmosphere is gloomy and dark, as we expect from a show set at the end of the 1800s – the approach of the twentieth century, as the characters often describe their own time period in the series. Rather than set in London (which for some reason seems to be the setting of most of these period dramas), the setting is now New York.

The story starts out with a young boy’s murder. The boy, who worked as a boy-whore in one of the local brothels, is wearing a dress. He’s been cut up beyond recognition. His heart and one of his eyes are missing, his hand has been severed from his body. Although the murder is gruesome, the police is not that interested in further investigating considering the boy’s social status. That is, except for Theodore Roosevelt, the new police commissioner, who does want to investigate the case and even goes so far as to set up a seperate taskforce.

This taskforce is led by our main cast. The first is Dr. Kreizler, a pioneering ‘alienist’ – which we would nowadays call a  psychologist – who wants to understand the minds of the criminally insane. Dr. Kreizler runs an institute for children with mental troubles. He seems to have some dark secrets in his past as well. His friend John Moore, illustrator for the New York Times, is drawn into the case through his friendship with Dr. Kreizler. Just like his friend, Moore has a few demons of his own, such as his alcoholism and his penchant for going to brothels.

Sara Howard, the female lead, is not only a friend of Moore’s, but also the first female to work at the police office in New York, albeit as a secretary rather than a police detective. Sara too has her own share of demons, and it’s these dark habits, dark traits that make the trio so intriguing.

As the story unfolds, and the trio starts chasing the killer, tracing his steps, searching through his mind, the bodies keep on falling and the situation becomes more and more dire. If they wish to understand their killer and how they will be able to catch him, they must face their own demons and vanquish them first. In this interplay between personal relations, demons and haunted pasts, and the present happenings, there’s a cold and dark parallel drawn between the main characters – in particular Sara and Dr. Kreizler – and the murderer, who is also haunted by his own demons.

The side cast varies from intriguing to rather bland (some characters, like Cyrus or Stevie, could be interesting but barely get any background story). The contrast between rich and poor is striking, especially in scenes shown side by side, when the screen switches from people living with dozens in small, overrun, cramped houses, to the gigantic mansion of a finance-expert who is bathing in riches. The scenes of poverty are dull, grey, sad, and the scenes that show the rich and powerful have dozens of colors, grandiosity, and bathe in light. A stark contrast, and one that is emphasized often throughout the show.

All in all, for fans of Penny Dreadful, Sherlock Holmes, Ripper Street, and a slew of other late murder mysteries shows set at the end of the nineteenth century, “The Alienist” is definitely worth watching. The setting is eerie and atmospheric, the murderer is not easily caught, the mind games and politician’s bribes add more depth to the show, and the interactions between the three main characters form the heart of the series. I, for one, hope there’s a second season soon.