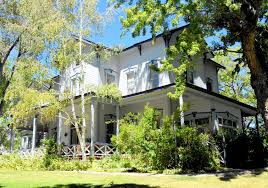 The Bliss Mansion can be found on 710 West Robinson Street in Carson City, Nevada. The house looks quite peaceful from the outside – but on the inside, the place is supposedly pretty haunted.

A three-story house completed in 1879, the Bliss Mansion was built by millionaire Duane L. Bliss. With fifteen rooms and built in an “Italianate style”, it was the biggest house in Nevada at the time. Duane had some experience building houses as a contractor, so when it was time to build his own home, he knew exactly what he wanted.

Duane Bliss and his family lived in the house for many years. It was eventually sold to people who wanted to turn it into a bed and breakfast. Due to it being a B&B, the house was renovated multiple times over the years, and is still in pristine condition.

Nowadays, the house has five guest suites with private bathrooms, and it’s a cozy, lovely home.

Apparently, when Duane Bliss bought the home, a cemetery was located on its ground. The bodies were exhumed and moved to another cemetery, so that Bliss could build his dream mansion. Not all the spirits were too happy about this, though, and some of these spirits still haunt the Bliss Mansion to this day.

Apart from the cemetery ghosts, of course Duane Bliss had to stick around too. As in love as he was with his home, he’s probably still keeping an eye out on the new owners and what they are doing to the property.

Haunted or not, the house is definitely worth a stay and looks like a romantic place for a retreat. And even if you run into the spirit of Duane Bliss, say a friendly ‘hello’ to your host.