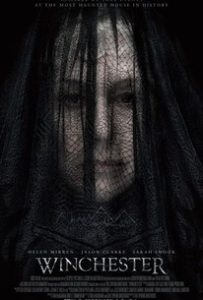 Winchester is a movie supposedly-based on real events. In the plot of the movie, Sarah Winchester, heiress of the Winchester rifle business, has built her own mystery mansion, the Winchester House, with over a hundred rooms. Each day, she keeps on adding to the mansion, and a building crew is busy working on it non-stop, adding rooms and then tearing them down again, with staircases that end up going nowhere, doors not leading to any rooms, and so on.

As for the movie, Sarah is doing this because she’s haunted by the spirits killed by Winchester rifles. These spirits are out for revenge because of the way they died. Sarah constructs rooms based on the spirit’s specifications, and once in those rooms, the spirits can finally find peace and move on to the afterlife. Some spirits can’t move on though, and for those, she locks them into their rooms with thirteen nails.

Now, Sarah and her family are haunted by a spirit worse than any she’s ever encountered, a truly malicious fiend. This happens right at the time when psychiatrist Eric Price comes to investigate Sarah’s sanity.

The movie isn’t really scary. There are some jump scares at the start that any horror buff will be able to recognize from miles away, but even the monsters don’t look that scary – more like ridiculous.

Despite that, and despite how corny the story sometimes it, it’s a genuinely atmospheric movie. The mysterious house, the constant noises of things being built in the background, the performance of lead actress Heelen Mirren, it all adds to bring an atmospheric, albeit not very spooky or original.

The supposed ‘true’ events behind the story are far from true either. Yes, the Winchester House is real, and yes, it’s a gargantuan house with over a hundred rooms and some staircases do end up going nowhere. But there’s a reason for that. The 1906 earthquake, which is also mentioned in the movie, destroyed part of the house and Sarah Winchester decided not to rebuild the top three floors, essentially cutting off some staircases halfway.

While not particularly scary, the fil mis still intriguing and atmospheric enough that horror buffs should watch it at least once. And if you’ve ever been interested in the Winchester Mystery House, it’s a must-see as well since some scenes were actually filmed inside the house.