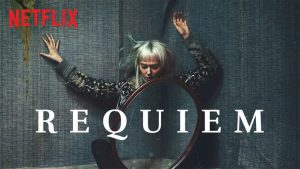 Requiem is the kind of rare gem that shows up on your Netflix feed every so often and that makes you jump in delight because it’s just so good. It’s a series that pulls you in from the start featuring eerie music, paranormal happenings, and a relatable heroine who is so flawed and so lost that you can’t help but feel for her.

Also, that cello music is so haunting, I couldn’t put it out of my head.

Anyway, on to the story. Matilda Gray is a cellist, barely twenty-three, and already a rising star professionally. In her personal life, she’s not doing that great, though. She pushes guys away, never letting them get close, not even her supposed best friend – who has obvious romantic feelings for her that Matilda pretends not to see.

Then, there’s her relationship with her mother, which seems pretty okay at first…until her mother commits suicide right in front of her. Talk about traumatizing.

Among her mother’s belongings, Matilda finds newspaper clippings about a girl who vanishyed twenty years ago, in Wales, in a small town named Penllynith. Desperately to find out what this missing girl has to do with her mohter, Matilda goes to Penlynith, where she finds an isolated, spooky manor that holds a great deal of secrets and that…somehow… feels familiar.

While the plot is excellent, you can’t exaclty say the series has a slow, intense build up. We get phantoms moving items and forcing people to suicide in the first fifteen minutes of episode one. We get a madman roaming through his old, gigantic house, smashing all mirrors in sight.

But once you get through those rocky first scenes, you actually get a pretty strong story, with a strong and steady build, excellent camera work, and a marvellous blend of mystery, suspense and horror.

Driven by atmosphere and the gorgeous surroundings, this series is a must-watch for fans of ghost stories and the eerie type of horror stories – think movies like “The Others” starring Nicole Kidman, the not “in-your-face” type of horror.

The series is compelling in every way, and a must-watch for all horror fans. Just don’t watch it late at night, because then, sleep is far from guaranteed.