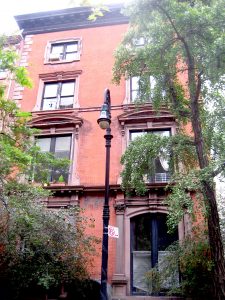 Built in the late 1850s, the brownstone saw its share of famous people passing by, including Mark Twain aka Samuel Clemens, who only lived there for about a year, though.

In the late 1900s, the house was converted into several apartments.

An actress named Jan Bryant Bartell and her husband moved into the top floor apartment. Bartell claimed she had several paranormal experiences in the house, including hearing phantom footsteps and voices. Bartell later died in mysterious circumstances. Her experiences involving the house were detailed in her book: “Spindrift: Spray from a Psychic Sea” which was published in 1974, just before she died.

Apparently, twenty plus ghosts are stalking this home, an astonishing amount. One of these ghosts is Mark Twain, although he only lived in the house for about a year. Multiple inhabitants of the apartments have claimed to see him on the first floor and near staircases in the house. These occurences happened early on in the house’s history, even as far back at the 1930s.

Perhaps the most notorious account of ghosts is the one described by aformentioned actress Bartell in her book. While living in the house, Bartell and her husband were tormented by spirits. Things started out small, with phantom footsteps and disembodied voices. But soon, their pet dog started freaking out, and a phantom grape even appeared on a clean dinner plate, although the couple hadn’t bought grapes in month. The grape was completely shriveled and smelled horribly.

Most unsettling, according to Bartell herself, were the odors that appeared out of nowhere: perfume, and a “rotting miasma” that smelled disgusting.

Bartell and her husband eventually called in a medium, who felt the presence of “something dead” under the floorboards: “a young girl with curly hair, blue eyes and a tiny nose, an aborted child and, of course, a small gray cat”.

Now, I don’t know about you, but those words seem pretty creepy to me. Creepy enough to pack my bags and leave. And that’s exactly what the Bartells did. Bartell herself believed the house had “poisoned her”.

If the house is haunted or not, it certainly seems like a scary location to live, what with all the tragedy, the murder, and the corpses possibly hiding under the floorboards (if you believe the medium the Bartells hired, that is). I wouldn’t want to stay the night, that’s for sure.