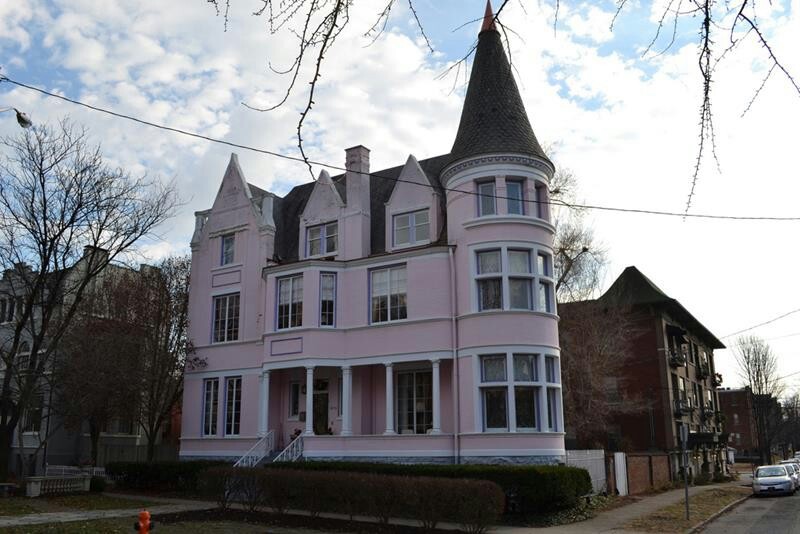 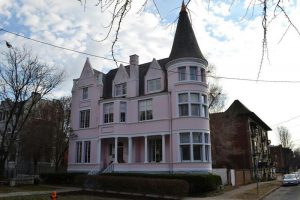 You can’t miss The Pink Palace. Mainly because, as its name suggests, it’s completely pink.

The house can be found on the southern end of St. James Court in Louisville, a street with Victorian mansions lining left and right and with a beautiful park area.

Looking at the architecture of this pink three-story Victorian mansion, it has reminiscents of French Chateaus, including a turret roof and observation windows.

Back in the day, the Pink Palace was a gentleman’s  club and casino, where the Victorian gentlemen came to enjoy cigars and brandy, and play a game of cards.

After being operated as a gentleman’s club for many years, the house was sold to a family who used it as a private residence until 1910. Then, the local chapter of the Woman’s Christian Temperance Union bought the mansion and… decided to paint the facade pink.

The house gained its colorful name, The Pink Palace, from that decision.

After this event, numerous other families lived in the house, but it still retains its pink exterior to this day.

The current and previous owners of the house all claim to have been visited by at least one spirit, nicknamed Alvery, who is a friendly, protecting presence and watches out for the mansion’s inhabitants.

Avery is described as an older, southern gentleman with white hair and a string tie.

As the story goes, one of the inhabitants, a young woman, was takin a bath in the house when Avery appeared. Scared and startled, she jumped out of the tub, just in time because someone had hurled a cement block through the window just above the bathtub. If she’d stayed in the tub, she would’ve been hit.

The story also claims that, minutes before a fire broke out in the kitchen, Avery appeared to other residents of the house, warning them.

People curious about the house can take a look inside here (the article shows various photos of the house’s interior).

If the house is haunted or not is nearly impossible to say, as we’ve only heard stories from residents. The home is a private property and it’s doubtful that paranormal investigators will be allowed to visit. If you do happen to visit and come across a ghost, let us know!