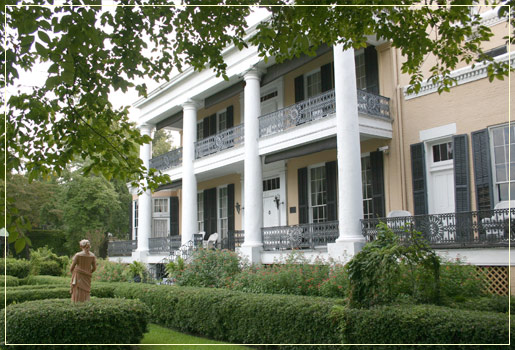 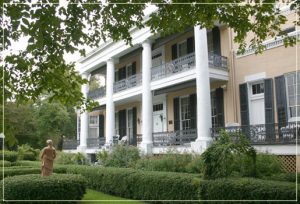 The Cedar Grove Mansion located in Vicksburg, Mississippi, is a striking antebellum mansion that has, unfortunately, seen its fair share of tragedy.

The house was originally built by John Alexander Klein, an intelligent young man who made his fortune in banking, cotton and lumber. In 1840, he commissioned the built of the house while courting Elizabeth Bartley Day.

After the marriage, the pair headed on to their honeymoon in Europe. While there, they purchased many of the furnishings that can now be found at Cedar Grove.

It took until 1852 before Cedar Grove was finished, but this Greek Revival style mansion turned out quite magnificent. Unfortunately, soon after it was finished, the house was bombarded during the war, leaving a cannon ball lodged into the parlor wall. The house was subsequently used as a Union hospital.

However, at the end of the war, both the house and the Kleins were still standing. The Kleins ended up having ten children in the home, three of whom did not survive past childhood.

In 1983, the house was purchased by Estelle and Ted Macky who restored the mansion and turned the home into the Cedar Grove Mansion Inn and Restaurant.

When the home was renoved, they uncovered several graves located on the property. These graves supposedly belong to the Klein children who passed away.

The entities most often scene are those of John Klein. Several people have claimed to smell pipe smoke  – usually a sign that John Klein is near – near the gentleman’s parlor.

Other visitors heard the sounds of a baby crying or of little children playing.

The spirit of Elizabeth Klein often walks down the front stairs of the home.

On the review page for Cedar Grove Mansion Inn & Restaurant, several reviewers mention the place is haunted, although the website of the inn itself doesn’t mention anything of the hauntings. While lots of venues have started using hauntings as a way of advertising their business, the Cedar Grove Mansion Inn & Restaurant seems to steer away from that.

And maybe they should, because with a location as beautiful as this one, you don’t need any ghosts to draw guests in…