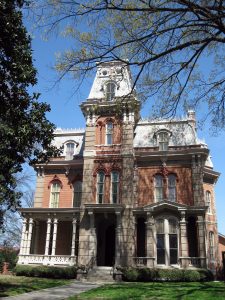 The Woodruff-Fontaine House is a historical building located at 680 Adams Avenue in Memphis, Tennessee. Currently a museum where you can even go on ghost tours, and a wedding venue, it was once a family home.

The house was constructed on behalf of Amos Woodruff, the owner of a successful carriage business. Construction began in 1870 and was finished by 1871. The house was so grandiose that the neighbours became jealous and hired the same firm to complete the house.

After the Woodruffs left the mansion, it was purchased by Nolan Fontaine, a succcessful business man and cotton factor. The Fontains lived in the home for 46 years until Mrs. Fontaine passed away in 1928.

The house was sold in 1929 with the intention of becoming an antique shop, which never happened. After, the house was sold again to Rosa Lee, who intended to expand her Free Art School. In 1959, the art school moved and the house stayed vacant until 1961 when it was bought through a public fund. It’s now a museum and can also be rented for weddings.

The ghost most commonly spotted haunting the mansion, is the spirit of Mollie Woodruff. She most often hangs out in her old bedroom on the second floor, called the Rose Room. She’s pretty harmless, though, nad mostly just sits on the bed or moves a rocking chair around.

Another ghost rumored to be haunting the house is the son of Fontaine, who purchased the house after the Woodruffs lived in it, Elliott Fontaine.

Ghost tours in the Woodruff-Fontaine mansion can be booked and last two hours. Paranormal enthusiasts can also book a 3-hour investigation with the lights out and access to all rooms.