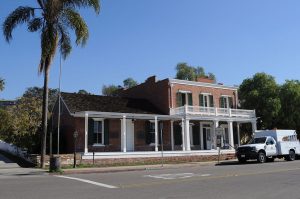 Built in 1857 in Greek Revival style, the Whaley House – once a residential property, now a museum – is located in Old Town, San Diego, California.

The house’s original owers were Thomas Whaley and his family. Thomas Whaley was born on October 5, 1823. During the California gold rush, he traveled from New York to San Francisco, to establish business relations. Eventually, he headed to San Diego in September 1851.

Two years later, he married Anna Eloise Delaunay on August 14, 1853. After the wedding, the couple returned to San Diego and moved into their new home, the future “Whaley House”.

After the tragic death, the family briefly moved to San Francisco. I nthe summer of 1868, they returned to the Whaley House after having it fixed up. 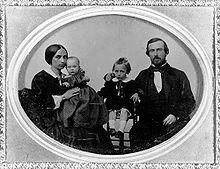 Another tragedy hit the Whaley family in 1882, when their daughter, Violet Eloise Whaley married George T. Bertolacci. Rather than a respectable man, the latter turned out to be a con man, and one day during their honeymoon, Violet woke up finding her husband gone. When Violet returned home, she was shunned by society who thought she was improper because she returned home without her husband and also unchaperoned.

Devastated by the betrayal and public humiliation that followed, Violet committed suicide by shooting herself in the chest with Thomas Whaley’s 32-calibre on August 18, 1885. She was only 22 years old at the time. She left a suicide note that included a passage from ‘Bridge of Sighs’, a poem by poet Thomas Hood: “Mad from life’s history, swift to death’s mystery, glad to be hurled, anywhere, anywhere, out of this world”.

After the tragic suicide, Violet’s sister, Corrine Lillian suffered an additional loss. She was engaged at the time, but her fiancé broke off the engagement due to the scandal related to Violet’s suicide.

Thomas Whaley, desperate to get away from the tragedy that seemed to haunt his family, built a new one-story home at 933 State Street in Downtown San Diego, leaving the Whaley House empty.

In 1890, Thomas Whaley died due to ill health, at their new address. his daughter, Anna Amelia Whaley died on December 12, 1905, at the home she shared with her husband and first cousin John T. Whaley.

The Whaley House stayed empty for two decades until Francis Whaley, the eldest son, decided to restore it in 1909. He turned the home into a tourist attraction, posting signs about the historical status of the building.  Meanwhile, Anna Whaley (Thomas’s widow), Corinne Lillian, Francis himself, and his brother George, all lived in the Whaley House.

Corinne Lillian, the last remaining child of the Whaley family, kept living in the Whaley House until her death in 1953.

With its tragic history of death and betrayal, it should come as no surprise to paranormal enthusiasts that the Whaley House is haunted. But surprisingly, even the Whaleys themselves believed the house to be haunted – and not by one of their own family members.

Shortly after the Whaleys moved in, they told the “San Diego Union”, a local newspaper, that they often heard footsteps in the house, which they believed belonged to the ghost of James “Yankee Jim” Robinson, who had been hanged on the property in 1852 for stealing a boat.

On the last weekend of every month, the Whaley House Museum offers a ghost hunting tour. The Whaley House has been featured in several ghost hunter shows on TV, including America’s Most Haunted, Ghost Adventures and Fact or Faked: Paranormal Files.

The house eventually even got its own low-budget movie, called The Haunting of Whaley House.

If you’re interested in finding out more about the haunting, just look for pictures or videos on Youtube about the haunting of Whaley House. There are tons of pictures which you can easily determine for yourself if they’re fake or real, but also some interesting footage. And of course, you can always go visit the museum, and find out for yourself…