TV Series Review: The End of the F***ing World 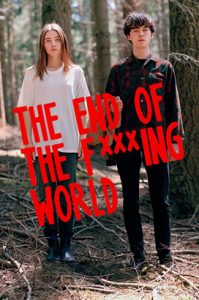 I’m pretty sure half of the teen population has ever felt this way. If you feel like this, or you have ever felt like this, then you should watch The End of the F***ing World, because it’s simply sublime. Tailored to those who feel like they’re on the outside, and don’t quite fit it, it mixes the epitome of black humor with a plot that is both unique and thrilling.

The two lead characters are phenomenal in their respective roles. At the start, James (the male lead) is intrigued by Alyssa (the female lead) for one reason and one reason only: he wants to kill her. Alyssa is interested by James mostly because she’s lonely. Her mother adores her new husband, Alyssa’s stepfather, and abides his every word. Alyssa’s new twin siblings get all of the attention, and Alyssa is left feeling like an outsider from society – much like James is.

When Alyssa suggests they run away, James initially goes along with the plan because it seems like the ultimate opportunity to kill her… But something else drives James too. He too, is lonely. He too, longs to find someone he can relate to and who can relate to him.

The characters draw you in, and despite many awkward situations, you feel yourself rooting for them to make it out of this unscathed, and to connect to each other.

At times hilarious, at times heart-breaking, this series is a must-see. With compelling visuals, genuine characters and a perfect music score, if you haven’t tuned into this already, then do so now.