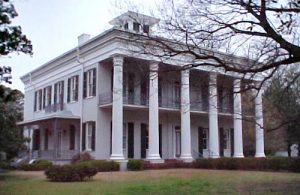 Sturdivant Hall is a historic Greek revival mansion, now turned into a museum. It’s located in Selma, Alabama and was completed in 1856.

The house was first inhabited by Colonel Edward T. Watts, who lived in it until 1864 when he and his family moved to Texas. The house was purchased by John McGee Parkman, a local banker, who suffered huge monetary losses in the following years and eventually ended up in prison. Assisted by his friends, Parkman tried to escape, but ended up being killed in the process.

The house was next sold at auction in 1870 to Emile Gillman, a local merchant. The Gillman family lived in the house until 1957 when they sold it to the city of Selma. After the sale, the house ended up being used as a museum.

The Ghost of John Parkman

Aforementioned John Parkman, down-on-his-luck banker, is said to haunt the halls of Sturdivant Hall ever since his tragic death. So too, apparently, would be the ghosts of his daughters.

Museum staff have witnessed several strange events at Sturdivant Hall, including footsteps when no one is around, doors opening and closing, objects moving on their own. Some witnesses also report seeing two little girls staring out of the upstairs window, who are presumed to be John Parkman’s daughters.

One of the first people to mention the story of the John Parkman ghost was Kathryn Windham Tucker, author of “13 Alabama Ghosts”.

Nowadays, if you wish to see John Parkman’s ghost, it’s just as simply as visiting the once stately mansion now turned into a museum, and investigate for yourself.