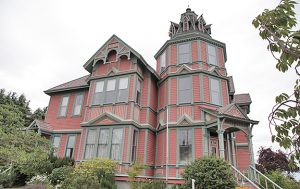 The Ann Starrett Mansion is a gorgeous Queen Anne house that breathes charm and history. Built in 1899, it was supposed to be the loving home of George and Ann Starrett.

The house was truly unique in architecture and design, with a breath-taking free-standing staircase, and a solar solarium that is downright incredible. With 8 bedrooms, 7 bathrooms, and numerous fireplaces, it’s also a gigantic house.

The entire house was build to commemorate George’s love for his wife. The solar calendar in the solarium, in particular the “Four Seasons”, was based on Ann’s likeliness.

Unlike many other haunted houses, this house didn’t meet with one tragedy after another. On the contrary, George and Ann lived in the house all their lives. They had one son, Edward Morris Starrett, who was born in 1894 and didn’t pass away until 1981, well into his eighties.

After several generations of Starrett descendants having occupied the house, it was purchased by Bob and Edil Sokol, who turned it into a Bed and Breakfast – and that’s when the haunting truly began, it seems.

The entities spotted are usually thought to be George and Ann Starrett, or perhaps one of their descendants. Several people also claim to have seen the entity of the nanny who the Starretts hired to look after their son.

The hauntings are pretty harmless. People catch glimpses of see-through figures, or sense a presence. Occasionally, lights flicker or turn on and off by themselves, but it’s all quite benevolent, and probably just the former owners dropping by for a visit.

Unfortunately, the mansion is no longer a B&B but is now a private residence, since the summer of 2017.