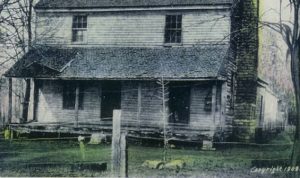 The Bell Witch is perhaps the most notorious story of a haunting set in the United States. If you’ve ever seen “Blair Witch”, then know it was inspired by th Bell Witch – who was probably ten times worse than the “Blair Witch”.

I read a book once, a scientific account of poltergeists. It was an old, stuffy book and I can’t recall the name, but it had a story in it about the “Bell Witch” which was very detailed and extremely scary – so scary I couldn’t sleep for days. Knowing that I can usually get through a horror film without blinking, and that I’ve read hundreds of horror books and true haunting books over the years, that’s saying something. Nothing I’ve ever come across, not even in regards to the Bell Witch after that, was anywhere near as scary as that book.

Anyway, back to the Bell Witch case!

The story of the Bell Witch focuses on the nineteenth-century Bell family, who lived in Adams, Tennessee. John Bell Senior, a farmer, was one of the most haunted members of the family. Ever since 1817, and lasting until 1821, his family was under attack by an invisible entity who they called a witch but who we, nowadays, would probably refer to as a poltergeist.

The entity could speak, could affect the environment, and could even change forms. The first story that detailed these events was published in 1894 by newspaper editor Martin V. Ingram, and called “Authenticated History of the Bell Witch”.

The activity centered mostly on aforementioned John Bell Senior, and on his youngest daughter, Betsy. The poltergeist liked to be called ‘Kate’ and didn’t mind being referred to as a witch.

The haunting began when in the summer of 1817, John Bell Sr. saw the apparition of a dog with a rabbit’s head. Soon after, activities started in the house: scratching, knocking, sheets being pulled from beds. Think “Paranormal Activity” but set in the 1800s, and you have a good idea of what the Bell family went through.

Kate, the visiting poltergeist, had two reasons to torment the Bell family: the first was to kill John Bell Sr. (although never giving a reason why the poor man needed to perish), and the second was to end Betsy’s engagement to Joshua Gardner, a boy from the neighborhood.

Witch activity lasted until 1821, at which time the witch claimed she would appear several years later. And she did, as promised, return for a brief period in 1828, before seemingly disappearing again.

Speculation arises whether the accounts are true or not because of the time between when the haunting happened (1817-1821) and the first written accounts about it, in the 1850s. However, reports of a Tennessee house being haunted which research indicates all seems to point at the Bell Witch farm, was rampant during the entire nineteenth century.

In 1934, Charles Bailey Bell, grandson of John Bell Jr., published a book called “The Bell Witch: A Mysterious Spirit”, in which he recounted stories told to him by his great aunt Betsy.

All throughout the twentieth century, strange occurences seemed to happen, not just on the property of the Bell Witch Farm (and the Bell Witch Cave, another important part of the haunting), but also to several descendants of John Bell Sr., the man with whom the haunting began.

You can now tour the farm and the Bell Witch Cave. It costs just $18 to tour both. Locations can be found on this website. Unfortunately, it seems like the original farm was torn down, and there’s now a cabin instead, which is a replica from the cabin the Bells lived in.

It’s doubtful you’ll find much paranormal evidence in this replica cabin, but maybe the witch will startle you with a surprise visit when you get down into her cave… Just be warned, when she latches on to you, she tends to stay awhile.