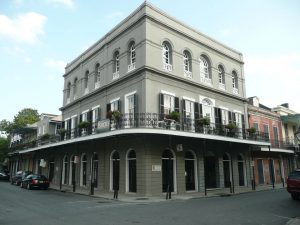 The LaLaurie House is a supposedly haunted house located in the French Quarter in New Orleans, Los Angeles. People who have watched American Horror Story: Coven, will probably recognize this house, or at least the name of the notorious socialite and alleged murderer, Marie Delphine MacCarthy, who once lived there. 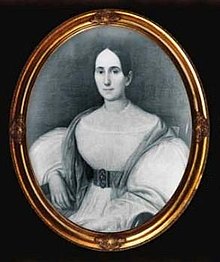 Marie was born in 1780, and passed away in 1849. She was more commonly known as Madame LaLaurie, a name she took on after marrying her third husband. She lived in New Orleans, was a famous socialite, and she’s also an alleged murderer, who was rumored to torture and kill her household slaves.

The house in question was purchased solely by Marie, although she did live there with her third husband and two of her daughters. The house was quite large, and even had slave quarters attached. The accounts of how Madame LaLaurie treated her slaves are mixed: while some people writing at the time claim her slaves usually looked haggard and wretched, others claim Marie was always polite to her slaves and seemed worried about their health – at least in public. Court records indicate that LaLaurie even freed two of her own slaves.

However, public rumors about slave mistreatment were widespread enough that a lawyer was called to the LaLaurie residence in Royal Street. This lawyer didn’t find any evidence of maltreatment of the slaves, though.

On April 10, 1834 a fire broke out in the LaLaurie residence. When police arrived on the scene, they found the seventy-year-old cook chained to the stove by her ankle. The cook claimed she had set the fire on purpose in a suicide attempt because she feared she would soon be taken to the attic room… And no one who came there, ever came back.

The New Orleans Bee of April 11 printed a story of how bystanders tried to access the slave quarters to make sure everyone was evacuated. The LaLauries refused to give them the keys, and they have to break down the doors. There, they found seven slaves, horribly mutilated, all of them claiming to have been imprisoned there for several months.

Judge Jean-Francois Canonge was one of th people who entered the premises, and who encountered slaves having gone through horrible ordeals. When he questions LaLaurie’s husband about it, the latter told him he had best stayed home and mind his own business.

After this horrific discovery became widely known, a group of local citizens attacked the LaLaurie residence, demolishing everything they could. The Pitssfuld Sun later stated in an article that bodies had been found in the yard of the Royal Street Mansion.

LaLaurie eventually fled to Paris, where she passed away several years later.

You would expect a house with such a horrible history would’ve been long destroyed, but even the mob attacks in 1834 couldn’t destroy this house. It still stands today at 1140 Royal Street in New Orleans.

After the LaLaurie’s abandoned the house, it remained uninhabited for several years. Prior to 1888, it was purchased and restored, and was subsequently used as a public school, music conservatory, a bar, and even a furniture store. The house was even owned by actor Nicholas Cage, at some point.

Hearsay and the Truth

Over the years, the accounts of what happened at the LaLaurie House back in 1834 and before, became enlarged and twisted, due to hearsay, and people who liked to make stories even worse than they already were. For example, Jeanne Delavigne’s book, “The Haunted House of the Rue Royal”, published in 1946, might have something to do with the house’s bad reputation.

This book, seemingly inspired by Mengele’s horrible but real experiments during World War II, claimed similar experiments had been done on the slaves in the LaLaurie mansion. One slave apparently got their limbs broken and then stuck back together, and was made to resemble a crab. Another slave had her intestines removed from her body, and they were then wrapped around her waist.

The stories were supposedly based on newspaprer accounts and interviews, but 100 years after the matter, it’s easy to say. The accounts hold no true to them – no newspaper report ever stated anything of the kind, and in fact, the only current newspaper that mentioned anything about the tortures was The New Orleans Bee – a newspaper with questionable reputation.

That something was amiss in the LaLaurie House is a given. A lawyer had already been sent there before, and enough bystanders saw that the slaves had been tortured for it not to have happened. Also, letters exchanged between Marie and her children, after she had fled to France, have her children expressly forbidden her from returning to New Orleans “after what happened there”.

So yes, something happened. But it’s safe to say it wasn’t the medical experiments or the torture of hundreds that the 1940s and later stories claimed it was.

In fact, some of the ghosts stories currently haunting the house, can maybe be traced back to 1894 when a tenant of the mansion, which had then been converted into apartments, was found murdered in his room. His belongings were ransacked, and the police assumed a robbery had taken place. During interviews with neighbors, one of these neighbors claimed the tenant had been having problems with ‘spirits’ in his home, or even possibly a ‘demon’.

The Ghosts of The Mansion

Ever since 1834, accounts of supernatural activity have plagued the LaLaurie House, and most of these hauntings are, of course, related to the slaves who were tortured there. Reports include: moaning or voices coming from the slave quarters, phantom footsteps, even some ghost sightings, and people sensitive for paranormal activities, can often pick up emotions from past inhabitants in the house, most particularly sadness.

However, it’s a little tough to investigate this phenomena considering… no one is allowed inside.

The house is currently owned by an oil tycoon from Texas, and he doesn’t allow any paranormal investigators inside, let alone any ghost tours. There’s a New Orleans ghost tour that pauses outside the mansion, but even they can’t get you inside. When production crews were filming for American Horror Story: Coven, he didn’t allow them in, or even allowed them to film the outside of the building.

Your best bet is to make friends with the owner. Or maybe stand outside and wait for one of the ghosts to come and befriend you… If one of the resident ghosts does appear in one of the windows, don’t forget to snap a picture, or even better, a video.