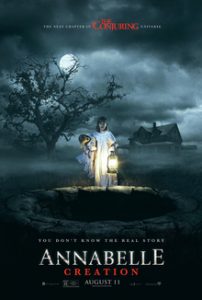 I’ve been wanting to see the movie “Annabelle: Creation” for ages, but because my boyfriend doesn’t like horror movies, and I don’t like watching them alone, we never got around to it. Until last weekend, that is.

While “Annabelle: Creation” is miles ahead of “Annabelle”, the first movie in this series,  that’s not exactly a compliment as the first movie was so God-awfully terrible it can only be described as an act of pure evil to force someone to watch it. Either way, “Annebelle: Creation” might be an improvement from its source material , but a decent horror movie, it is not.

For an origin story, the good part is that, besides the Annabelle doll, we get a whole host of original characters. The movie starts by showing us images of a happy family – a dad who is a dollmaker, a young daughter, and her loving and caring mother. Then, minutes into the movie, the daughter gets hit by a car and dies.

Fast forward twelve years, and we see a bus filled with young orphan girls who are headed towards the family’s home. Having lost their daughter so many years prior, the husband and wife team have apparently decided to allow a bunch of orphans back into their house despite, as is revealed later on in the movie, the fact their house was occupied by a demon not-that-long ago, and the remnants of said demon are still locked up in their daughter’s old bedroom upstairs in the (you guessed it) doll named Annabelle.

What could possibly go wrong?

From the outset, the book feels like any haunted house flick. We get a bunch of young orphans in an isolated house with, as the nun who acts as their caretaker so eloquently states, nowhere else to go. The main character is soon revealed and it’s, of course, the weakest member of the group: Janice, who is already weakened by polio and can barely walk.

Why does evil always prey on the weak, or those physically disabled in some way? There’s an arrogant older girl in the movie whose name I already forgot and who, for all I care, can be the primary victim of the evil haunting the Mullins home. But yet again, a young, sweet, innocent girl is being targeted by a demon. Pick someone of your own size, demon, will you?

Anyway, although the build-up is a little slow (which is a good thing in my book), things go bad pretty fast from the moment Janice uncovers the doll. And I’m talking lights going out, people getting thrown about, even ripped in half kind of bad. “Annabelle: Creation” doesn’t do subtlety, no sir.

The movie is riddled with cheap jump scares and events that don’t make a lot of sense when you think about them logically. The first half of the movie is still pretty enjoyable, with Janice creeping into the deceased daughter’s bedroom, with the doll being revealed and my favorite scene – the doll with creepy blanket on following Janice as she wanders through the room. That was, hands down, my favorite scene in the movie.

Then, as soon as Janice locks herself into the chair lift along the stairs, and suddenly gets shot straight up toward the ceiling, the movie became a laughable spectacle of one over-the-top-event following another, one even more ludicrous than the first. The movie relies on the jump scares and heavily-made-up demons for its horror elements, rather than trying to instill genuine, eerie fear in its audience which, in my opinion at least, is the wrong focus.

If you like the franchise so far, “Annabelle: Creation” isn’t the worst addition to the series, but in general horror movie terms, it leaves a lot to be desired.