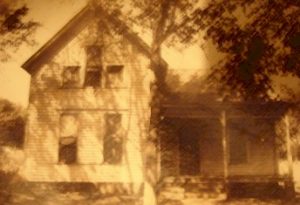 The Villisca Axe Murder House is famous, not just for its reputation of being haunted, but also because – as suggested by its name – it’s the scene of a horrific crime that happened in 1912.

On the evening of June 9, 1912 and the early morning of June 10, 1912, an unknown assailant entered the Moore residence in Villisca, Iowa, and bludgeoned everyone present inside the house. The people present inside the house were the Moore family: parents Josiah B. (aged 43), Sarah (39) and their four children: Herman Montgomery (11), Mary Katherine (10), Arthur Boyd (7) and Paul Vernon (5). On that particular night, two visiting girls also stayed the night: Ina Mae Stillinger (8) and Lena Gertrude Stillinger (12). These guests had been ivnited by Mary Katherine.

That evening, on June 9, the Moore family had attended the Presbyterian church and had gone home at 9.30 p.m., along with the Stillinger girls.

At 7 a.m. the next day, Mary Peckham, the Moore’s neighbour, grew concerned after she noticed the family hadn’t come out to do their morning chores. She knocked on the door, but nobody answered. She tried to open the door and discovered it was locked. Mary Peckham called on Ross Moore, Josiah’s brother, who eventually unlocked the door with his house key. Moore went inside the house and first found the bodies of the Stillinger girls in the guest bedroom. He quickly returned to Mary Peckham, and told her to call the peace officer, who arrived shortly after.

Police quickly arrived. The murder weapon, an axe belonging to Josiah, was found in the guest bedroom, along with the bodies of the Stillinger girls.

Doctors concluded the murders had taken place between midnight and 5 a.m. While some suspects were brought forward in the subsequent trial, no one was actually convicted for the horrific murder that took place on that fateful night.

As can be expected from a house in which an entire family was killed, the Villisca Murder House changed hands often over the years. In 1994, Darwin and Martha Linn, local farmers, decided to purchase the house. They already owned and operated the Olson-Linn museum, and they purchased the house with the intention of preserving more of the area’s history. Using old photographs, they began restoring the house to the state it had been in back in 1912.

Next, using the testimony during the trials that followed the murders, the Linns placed the furniture in approximately the same places as it was located at the time of the murders.

If the house was haunted prior to the Linns purchasing it, is unknown. There are no records about potential hauntings back then, but people don’t always talk about hauntings and while it’s something that is accepted in nowadays culture, this wasn’t always the case in the past. What we can say however is that, ever since the Linns opened up the “murder house” to the public, a lot of people claim it’s haunted, and that they’ve had experiences there.

The Villesca Murder House doesn’t look like the kind of house that would be haunted – from the outside. It looks pretty normal, a white two-story home, old now, but not that strange or peculiar. By looking at it, one would think that, if not for the horrible murders that took place on June 10, 1912, the house would’ve never been haunted.

The Villisca Murder House can be visited, and even has its own website. It’s open for tours and overnights. You can even go on a virtual tour on the website. From that website, there’s a link to all kinds of Youtube videos of people who have visited or stayed overnight and who have investigated the house, some of them even having captured paranormal evidence.

A lot of people who have visited the house claim they’ve experienced paranormal activities once inside, especially when calling out the names of the children murdered in the house.

However, there’s a website about a movie apparently being shot in regards to the Villisca Murder House that states the film makers interviewed all residents of the house prior to 1993, and none of them have had any paranormal experiences at the house. Also, during filming, the video creators apparently spent dozens of hours filming in the house at all hours of the day and night, and have not had a single paranormal experience.

After reviewing all the evidence, it’s up to you to decide whether you think the house is haunted or not. And maybe, just to cast off all your doubts, go have a visit there, stay the night, and see if any unexpected guests come pay you a visit.