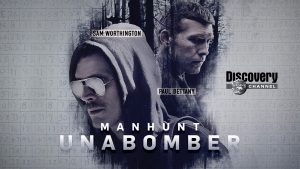 Manhunt: Unabomber is an eight-part TV series that you can now watch on Netflix. As the name suggests, it’s about the FBI’s manhunt on the so-called “Unabomber”, a mysterious individual who sent bombs through the mail, targeting universities and airlines in particular (therefore gaining the nickname ‘unabomber’).

Now, I’m quite obsessed with reading about and watching TV series about serial killers, but Theodore Kaczynski, the unabomber, is a name I’d only heard of in passing. After watching this series, I’m not sure why I’d only heard about this individual fleetingly considering the FBI manhunt on the “unabomber” was one of the largest in history.

Anyway, we’re not here to read about the real Ted Kaczynski, but about the fictional one, portrayed by Paul Bettany, who does an excellent job portraying a man who is partially mad genius, partially serial murderer. The other main role, that of Jim Fitzgerald, the FBI agent most responsible for helping catch the “unabomber”, is portrayed by Sam Worthington. Worthington’s display is less phenomenal, but still more than adequate.

The series is a bit of a slow burn, but I’m quite fond of that: I like a slow build up, it makes the climax all the more appealing. The first few episodes focus mostly on Fitzgerald, the profiler with a not-so-amazing background who still graduates top of his class and is brought in as a profiler on the “unabomber” case. Unfortunately, this doesn’t turn out quite as Fitzgerald hopes for, as his role seems to be more about writing out details about already-existing profiles rather than getting in the head of the man he’s hunting. Fitzgerald is quite full of himself, quite arrogant, but it’s exactly this arrogance and this notion of self-confidence that ultimately get him heard.

A few episodes in, Fitzgerald gets assigned a team to work with him and although the other FBI agents are still reluctant toward his approach, Fitzgerald clings on to what he later calls “forensic linguistics” and utilizes those to solve the case. Thankfully, Kaczynski sent a manifesto out into the world, a pretty dense work with some intriguing theories, and that is large enough and comprehensive enough for “forensic linguistics” to actually work their magic. If Kaczynski hadn’t sent his manifesto, it’s doubtful he would’ve ever been caught. However, for this bomber, it wasn’t about the bombs at all – it was about the message he was trying to send.

About halfway through the series, Kaczynski – or well, Bettany playing Kaczynski – enters the picture, and from there on, the viewer gets to see an interesting parallel between Fitzgerald and Kaczynski who, despite being on opposite sides of the law, aren’t all that different. The more Fitzgerald actually listens to Kaczynski’s beliefs about the dangers of modern technology, the more he starts to believe in the bomber’s theory, the more terrifying the series becomes, because Kaczynski’s points of view are actually quite understandable and relatable. His message is clear, especially in today’s world, where we’re all ruled by machines, and it’s also quite true. That’s a terrifying thing to think about.

It’s also terrifying to think that the reason Fitzgerald can ultimately catch Kaczynski is because he has a similarly obsessive worldview.

The series moves back and forth between 1995 (before the “unabomber” is caught) and 1997 (when Kaczynski is caught and in prison, awaiting trial). Both parts are equally strong: in 1995, Fitzgerald is the man falling apart as he tries to capture Kaczynski. In 1997, Kaczynski is the man falling apart as Fitzgerald slowly rebuilds his life – albeit as a completely different man than before.

With stunning visuals, a slow pace and strong climax, intriguing and well-portrayed characters, Manhunt: Unabomber is a must-watch for fans of true crime.