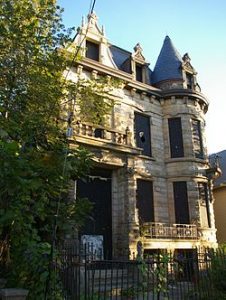 Franklin Castle, with its more than twenty rooms and eighty windows, can definitely be considered enormous… but is it haunted?

The house is located in Ohio, at 4308 Franklin Boulevard in Cleveland and by all accounts, is considered one of the most haunted houses in Ohio.

The house was built between 1881 and 1883 for Hannes Tiedemann, a wealthy German immigrant who wanted to live there with his family. Hannes was a barrel-maker and wholesale grocer, but soon became a banker, and this profession made him extremely wealthy. The grand home built on Franklin Boulevard was supposed to underline his new social status. A famous architectural firm, Cuddell and Richardson, was tasked to build the mansion for him in what was, at least back in the late 1800s, one of the most upscale residential areas of Cleveland, Ohio.

Three more children died over the next three years. It seemed as if tragedy had hit the Tiedemann’s, and hit them hard.

In an effort to focus on anything but tragedy, Tiedemann decided to expand the house. A ballroom was added on the third floor, gargoyles and turrets were added on the exterior. Gas lighting was installed throughout the house, and according to legend, many secret passageways were added to the propriety too – although there’s no trace of these passageways left in the present day, leaving one to speculate if they existed at all.

On March 24, 1895, Louse Tiedemann died at age 57 from liver failure. Hannes remarried shortly after, which led to a lot of speculation about the circumstances of Louise’s death. Either way, Hannes sold the Franklin Castle soon after, moving to a grander home.

By 1908, Tiedemann’s entire family, including his son and grandsons, had passed away. Hannes Tiedemann perished in the same year, suffering a massive stroke while walking in the park. Possible curses and hauntings aside, one can easily conclude that if not by anything else, Hannes Tiedemann and his family were certainly haunted by tragedy.

During the years Hannes Tiedemann lived in the house, various rumors began to spread about the mysterious tunnels in the house, which were supposedly used by Hannes Tiedemann for his sexual indiscretions. Given no tunnels or mystery rooms can be found in the present day house, one should wonder the truth of these accusations.

One such story includes Tiedemann murdering his niece by hanging her from a rafter. She was supposedly insane, and Tiedemann wanted to put her out of her misery. In other versions of the story, the murdered girl is actually Tiedemann’s mistress.

But with no secret passageways to be found, are these rumors true or are they just made-up stories?

The Romano family reported several ghost encounters in their new home. As the story has it, the first day the Romano family moved in, Mrs. Romano told the children to go upstairs playing. When they came back downstairs for cookies, they asked if they could have a cookie for their new friend, a little girl who was upstairs crying. Mrs. Romano followed the children upstairs but of course, she didn’t find a little girl there.

The haunting didn’t end there. Mrs. Romano often heard organ music from different parts of the house, footsteps when no one was around, disembodied voices, and sounds coming from the ballroom.

Desperate for help, the Romano family contacted a Catholic priest. This priest apparently declined to hold an exorcism, but told them he sensed a bad presence in the house, and that they should leave as soon as they could.

Not ready to give up on their restaurant dreams just yet, the Romano family called in help from the now-defunct Northeast Ohio Psychical Research Group, who decided to investigate the house. If the stories are to be believed, one of the investigators ran out of the house screaming.

In 1974, the Romanos sold their house to Sam Muscatello, a man who was keen on cashing in on the eerie reputation Franklin Castle had built so far. He offered guided haunted tours throughout the house. Muscatello also began roaming the house, searching for secret passages. During one of these searches, he found a pile of human bones behind a panel in the tower.

Some people took this find as proof that Hannes Tiedemann was the murderer local legend claimed him to be, while other people believed that Muscatello, keen on earning more revenue from the house’s spooky history, had planted the bones there himself.

In 1984, the house was sold to Michael Devinko, the last husband of actress Judy Garland, who promptly started renovating the house. He tracked down the original blueprints of Franklin Castle, even some of the Tiedemann furniture, and the original house key which, after all these years, still fit. Despite putting nearly $1 million into restoring the home, DeVinko still moved out and put the house up for sale in 1994.

In 1999, Michelle Heimberger bougth the castle and carriage house and wanted to restore the house to its former glory. Unfortunately, that same year a fire badly damaged the house, and the restoration couldn’t be completed.

In 2011, Franklin Castle was purchased by a tapestry artist named Chiara Dona dalle Rose. A permit for residential alterations was issued and if rumors are to be believed, the buyer intends to convert the building into three family homes.

Most of the ghosts haunting Franklin Castle seem to be related to the secret passages and the murders supposedly committed by Hannes Tiedemann – although it’s far from proven that any of this actually happened, or any of those passages actually existed.

Hans Holzer himself, one of the most famous ghost hunters of all time, paid a visit to Franklin Castle too, according to this article found on Week in Weird. Holzer was convinced that the ghost haunting the mansion was a thirteen-year-old girl named Karen whose death was made to look like a suicide in the third-floor ballroom. This ballroom was burned away in the 1999 arson fire, but soon rebuilt by the then-owner Michelle Heimberger. Conveniently, if any proof of this murder-made-to-look-like-suicide existed, it was burned away.

Whether Hannes Tiedemann ever killed someone or not, visitors to Franklin Castle have often reported seeing a “Woman in Black”. This ghost could be the Karen mentioned in Hans Holzer’s report, or it could be Mrs. Tiedemann, or Tiedemann’s fifteen-year-old daughter. Options and possibilities enough, since the house does seem to be rooted in tragedy.

Since the 1960s, passersby and visitors have reported seeing this ghostly woman on balconies and upstairs room. There have also been rumors of a “Woman in White” haunting the castle. Cold spots, crying children, you name it, it’s there.

What might be interested is a piece of video evidence captured on camera by YouTube user CastleSeeker, who apparently went urban exploring in the castle and shot a ghost on camera. He only saw the ghost the next day. For you to decide whether the video evidence is real or not, but it’s certainly interesting to look at.

If you’d like an inside look of Franklin Castle, check out the article on Forgotten Ohio.