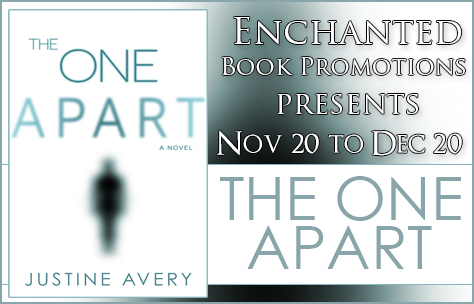 I’m interviewing Justine Avery today, author of paranormal “The One Apart”. Welcome to my blog, and thanks for answering my questions.

A love for reading inspired me to write.  I think it’s natural for all of us who love to read to be drawn to the idea of creating our own stories, developing our own ideas, and giving readers that sense of surprise or happiness that we enjoy when we read a great story.  When I was eleven or so, I started my first novel.  It was essentially a retelling of the Cinderella story with a main character named Ella that—SURPRISE!—would be revealed as a secret Cinderella.  It’s a good thing I never finished it!  After that, I believed the folks that told me that writing is more of a dream and not really a career, so I only wrote sporadically when I was really moved to live my biggest dream, only for life and that “real career” to get in the way.  There were so many detours—for decades—but now I realize they’re all really valuable experiences for the life of a writer.  Finally, the urge to write, the feeling that you’re supposed to write, took over, and I finally gave my writing “dream” the priority it deserves.

For The One Apart, I woke up one morning with just one interesting sentence in mind as an idea for a brand-new story: “he remembered everything.”  It felt really impactful, like the fact that this person remembered “everything” was a big deal, that it wasn’t supposed to happen, something went wrong, or maybe, someone would be really upset to discover this person did remember everything.  That was it.  And that’s my favorite part of writing.  I love having no idea what the story is and just writing to uncover it.  I wrote two scenes from that idea and set it aside because I was hoping to write a short story and I knew this idea was “a long one.”  And two years later, when I sat down to start writing my first novel, I picked up this story idea again. I knew this one was the idea to run with.

This year has been a huge learning curve for me, just in discovering what it takes to edit a novel-length work and especially, one of this size (622 pages in paperback!).  There are also complex ideas, a big cast of characters, and two worlds to balance.  With this kind of length to deal with for my first time (see the next interview question!), I had to learn what my editing style is and determine the best method for all future projects.  So, my editing process borrows a bit from Stephen King’s wisdom: write just for yourself, then set the project aside and allow yourself to forget the story so you can return to it and just read it as a first-time reader—don’t edit, maybe just jot down a few notes, just read for the story itself—then edit it for yourself alone, before you ever allow another reader or viewpoint in.  That’s genius.  It guards the story and keeps it whole and as “magical” as you intend it to be, before you open it up to criticism and invite more opinions to ensure your ideas are getting across to other readers.  My editing took ages; I had so many notes on themes, character names, formatting, how to break the story into chapters, even logic for making sure the rules of the worlds were adhered to.  I read through the entire epic story about four times, editing as I went along, before I allowed in the first outside reader.  And of course, the feedback and editing continued round after round from there!  …through formal editors, beta readers, formal proofreaders…

Yes!  I’ve written and published umpteen shorter stories and novelettes, even a few short story series, before sitting down to write my first novel-length story.  I could’ve avoided it forever, never having written a story that long and not knowing what it would require of me.  It was my husband who lovingly dictated “you’ve got to write your novel now,” and so, I sat down and did it.

PUBLISH the novel.  The One Apart is epic, its editing requirements were epic, and I wanted to finish the project and get this saga out to the reading population before the year ended.  I’ve done it!

I have a few short stories that belong in a collection full of tales of those moments in life when everything changes, when a new path is chosen, when we’re jerked right out of our old ways—all with twists and surprises, of course!

Title: The One Apart

Only one obstacle stands in his way of enjoying a normal life. He remembers—every life he’s lived before.

Tres is about to be born… with the biggest burden any has ever had to bear. He is beginning again—as an ageless adult trapped in an infant body.

He and his teenage mother face life filled with extraordinary challenges as they strive to protect, nurture, and hide how truly different he is. But Tres alone must solve the greatest mystery of all: who is he? The answer is linked to the one question he’s too afraid to ask: why am I?

In his quest, Tres discovers that all is considerably more interconnected and dynamic than he could ever imagine—and fraught with far more danger. He cannot hide from the unseen threat stalking him since his birth.

Life as he knows it—as all know it—is in peril. And Tres is the only one aware.

Justine Avery is an award-winning author of stories large and small for all. Born in the American Midwest and raised all over the world, she is inherently an explorer, duly fascinated by everything around her and excitedly noting the stories that abound all around. As an avid reader of all genres, she weaves her own stories among them all. She has a predilection for writing speculative fiction and story twists and surprises she can’t even predict herself.

Avery has either lived in or explored all 50 states of the union, over 36 countries, and all but one continent; she lost count after moving 30-some times before the age of 20. She’s intentionally jumped out of airplanes and off the highest bungee jump in New Zealand, scuba dived unintentionally with sharks, designed websites, intranets, and technical manuals, bartered with indigenous Panamanians, welded automobile frames, observed at the Bujinkan Hombu Dojo in Noba, Japan, and masterminded prosperous internet businesses—to name a few adventures. She earned a Bachelor of Arts degree that life has never required, and at age 28, she sold everything she owned and quit corporate life—and her final “job”—to freelance and travel the world as she always dreamed of. And she’s never looked back.

Aside from her native English, Avery speaks a bit of Japanese and a bit more Spanish, her accent is an ever-evolving mixture of Midwestern American with notes of the Deep South and indiscriminate British vocabulary and rhythm, and she says “eh”—like the Kiwis, not the Canadians. She currently lives near Los Angeles with her husband, British film director Devon Avery, and their three adopted children: Becks, Sam, and Lia. She writes from wherever her curiosity takes her.

Avery loves to connect with fellow readers and creatives, explorers and imaginers, and cordially invites you to say “hello”—or konnichiwa.

Author Interview with Amanda Meuwissen
Book Spotlight: About Last Summer
Virtual Book Tours: What are they and why should you do one for your book?
Majanka
0
Tags :
author interviewsgiveawaysvirtual book tours