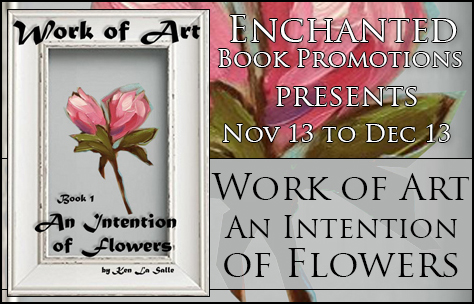 I’m interviewing Ken La Salle today, author of YA contemporary “Work of Art: An Intention of Flowers”. Welcome to my blog!

That’s a tricky question, mostly because I’ve known most of my life I wanted to be an author just as I knew I wanted to be an actor, a singer, a director, a… It took a while for me to sort things out. One of the great things about being an independent author, however, is that I get to do so much more than write. I produce and record my own audiobooks, take my career in directions I might never have otherwise, and generally spend my days in a playground of my own making.

So, I guess my answer would be that I always wanted to be an author. It just took a while for me to realize that meant I could be anything I wanted to be.

There’s this famous bridge in Los Angeles or, I suppose, I should say there was. The Sixth Street Viaduct rose over the LA River, providing unique panoramas of Los Angeles neighborhoods unlike any you’re likely to see again… at least, not until the bridge is rebuilt in 2019.

One afternoon, my wife and I were driving home and as she took us over this bridge, I looked down to see a group of children painting the pavement in what looked like a parking lot. As usual, for me, I wondered about the story there. What motivated this painting? Who were the artists? What drove them?

An Intention of Flowers isn’t just about teachers and students. It’s about artists, young artists growing up in a world that has commercialized art to the point where we see so much of art as worthless/worth less. Just like any working artist, I feel that devaluation of art deep in my gut, which I suppose inspired me to write this as well.

“Write Drunk, Edit Sober” is often attributed to Hemmingway and I have to say I agree.

Granted, I don’t write drunk. But I think there’s more to this than just an encouragement to drink. It’s about being open to the experience. I like to leave all issues of editing, expectations, and commercial value out of my mind when I’m writing… which makes editing that much more entertaining and challenging.

My first step, after I complete a first draft that I’ve probably been mulling through my noggin for several years and writing for a few months, is to put it aside for as long as possible. Having a fresh eye is crucial because my biggest changes are usually from my first draft. This is also when I add color. Literally. You see, I write too fast for details when I’m laying down that first draft so my second draft becomes one in which I’m putting in all the detail. Colors, looks, furnishing, decorations – all that background stuff.

Third draft follows pretty quickly and, if I’ve done everything right and had a good helping of luck, this happens fairly quickly. From there, it’s on to my editor, Darryl. I’m fortunately to have found an editor who gets what I’m going for and understands that I am not afraid of dropping in a really bad joke every now and then.

Short answer: My editing process is a mess. And I wouldn’t have it any other way!

I really wish I could say that was so; I would love to be starting my journey as an author just now. With over 30 titles available on Amazon, however, that simply isn’t the case. I’ve been writing most of my life and I can’t get enough of it. An Intention of Flowers is not my first book but it is far from my last.

Goals are essential if you’re going to work as an artist. Having said that, I don’t set yearly goals because I’ve already written the books I’ll release in 2018.

Instead, I decided to go the independent route like so many of my fellow authors. I write and publish my own work, produce my own audiobooks, and set my own course as part of a five-year plan. My goal is further off but I’m hoping to create something grand in the process.

This is a dangerous question as I’m always working several releases ahead of time. With that in mind, here are simply a few…

Title: Work of Art: An Intention of Flowers

A parking lot filled with history, fear, and regret.

A young man named Joseph Arillo sits in the parking lot and paints the pavement with flowers.

And Andy Hollis steps in it.

As the new art teacher at Santa Ana High School, he’s too curious about Joseph’s Flowers and unravels both of their lives in his pursuit for answers.

He learns that it’s all part of a rite of passage, an absurd test started by Joseph Arillo’s father, the suspiciously world-renowned artist named only Tom. Which also connects to the drama teacher at Santa Ana High, Katie Bustos. Whose daughter, Desiree, may or may not be dating Joseph. Who is putting himself in danger from a local gang, the lot’s mysterious history, and the police.

Andy puts himself in danger of losing his job, his home, and his freedom. If he can’t solve the riddle of Joseph’s Flowers, both of their lives will go up in smoke – despite any help from Winny, the old, Slovakian bureaucrat at school, or his students, or Tom himself.

But is Tom trying to help? And is Joseph really up to his father’s test?

And is Andy really fit to be a teacher? He doesn’t understand kids, can’t get to school on time, and… doesn’t appear to care about art or families or anything. But Joseph’s Flowers will challenge everything Andy believes: about himself, about the world, and most importantly of all about art.

Before Andy and Joseph are finished, they will witness the power art has to provide inspiration, to waken our hearts, and to shatter everything you ever believed about humanity.

An Intention of Flowers is the first book in a 5-book series, modestly titled Work of Art, about growing into the person you always wanted to be, making the most of what you have to give and not just what you have, and the power in each of us when we chose to be ourselves.

Author and occasional philosopher and monologist, Ken La Salle’s passion is intense humor, meaningful drama, and finding answers to the questions that define our lives. Ken La Salle grew up in Santa Ana, California and has remained in the surrounding area his entire life. He was raised with strong, blue collar roots, which have given his writing a progressive and environmentalist view. You can find a growing number of his books and performances available online. Find out more about Ken on his website at www.kenlasalle.com.