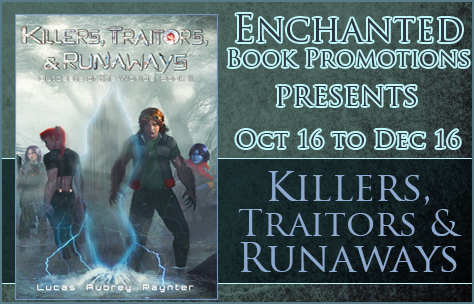 I don’t recall when I settled on being an author as a specific identifier, but I long wanted to be a writer. I just enjoy the creative process in general, thinking up (what I believe to be, at least) interest characters, encounters and ideas.

Of course, thinking those things up is the easy part. The writing is where the work comes in.

As it was originally the second half of my first book, Outcasts of the Worlds, many of the core ideas were already laid down. That said, there were thematic elements woven in that wouldn’t have been there if this had been in the first novel as planned.

In the basest example I can offer, the prologue is title “All Good People,” and the takeaway is that maybe self-proclaimed good people are the ones you should be more wary of. This might sound a little contrarion to how we’re taught to view the world and how people often view themselves, but it was an idea that rolled in my head for a while, and one I ultimately used to set the tone.

Kinda all over the place. Generally, after I write a scene, I’ll return to it the next time before I set down, before moving on. This is both to get back into the groove of things, as well as clean it up a little. This is when things go smoothly.

When things are, generally when I get locked up at a point in the story, I’ll go back to the very beginning, reread everything, and often end up redrafting some scenes completely from scratch. In the case of KT&R, I excised one segment (and a character who appeared in it) entirely, as while I liked it, the story could do fine without it.

But, yeah, once I’ve finished rereading everything, I tend to figure out either where things started going wrong, or how I want to proceed.

Was writing this book harder or easier than writing your first book? In what way(s) was it different?

The answer to your first question is ‘yes.’ It was both.

The circumstances behind KT&R were vastly different. When I wrote Book I, I’d done a lot of writing, but never wrote a book before. The first chapter was redrafted more than anything I’ve ever done in my life, and I was getting a bit of feel for the form and structure I wanted to use.

There were also a number of formatting issues when working with my editor that made the process to clean up the text a lot harder—things I learned from and integrated into Book II from the get-go. In terms of sheer composition, just knowing how to present things made work on Book II much easier, when it came to the back-end of the process.

As for the harder, there were two things: the first was just real life, as I was stuck in a stressful business deal that was going really bad for the stupidest reasons, and I couldn’t get enough room to focus on the story. I had to take a break for a month and a half because I just couldn’t write.

The second was on me, which actually comes back to the editing process above. A much older and rawer draft of this story exists that I’ve been using as a template for these first two books. There are parts I’ve really liked that I’ve tried to keep in, that had become incompatible owing to how my writing style has evolved. The broad outline is still reflected in the final text, but I needed to distance myself from the minutea, and things started getting much better (and easier) once I did.

Well, I’d have loved to finish Book III, but that wasn’t going to happen. I meant to have KT&R out a while ago, actually. It was virtually done, but little things kept happening and I only decided recently to just lock in a date and get it out there.

The aforementioned Book III, Into Darker Hearts. There are hearts. And they are darker.

As reality nears its final days, worlds fall to ruin. A benevolent god is shackled, and when freed, will create a new one … allowing only the pure of heart. A company of seven have united on a bloody quest to stop him, but have little hope of emerging victorious.

The outcasts are adrift—they have a mission but no means to fulfill it. Airia Rousow, the fallen goddess who set them on their path, is gone. Guardian Poe, her intended successor, believes deification will absolve him of his sins and his remorse alike. And Zella Renivar, daughter of the Living God, is still hunted by her father’s agents, drawing danger on them all.

Trapped in this storm, Flynn is able to find and open the ways between worlds, but cannot discern which path is the right one. Since losing the trust of his closest friend, the temptation to fall back on his former, deceitful ways grows with every crisis he faces.

These are heroes not of virtue, but of circumstance—and it will fall on Flynn to keep them all together.

Lucas Aubrey Paynter hails from the mythical land of Burbank, California, where there are most likely no other writers at all.

Back in 2014, he published Outcasts of the Worlds, and he’s now releasing its follow-up, Killers, Traitors, & Runaways.

A fan of gray-area storytelling and often a devil’s advocate, Lucas enjoys consuming stories from a variety of mediums, believing there’s no limit to what form a good narrative can take.