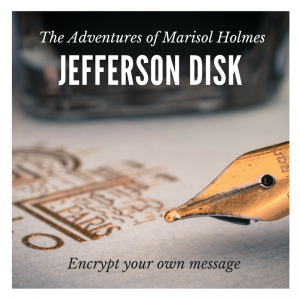 Writing The Adventures of Marisol Holmes, I had to do a lot of research, not just into the different species of shifters that would appear in the book, but also on other rather mysterious topics. One of those topics was ciphers.

The Jefferson disk, or wheel cipher as the inventor, Thomas Jefferson named it in 1795, is also known as the Bazeries Cylinder. It’s a cipher system, or code system, using a set of wheels or disk, each with the 26 letters of the alphabet arranged around the edge.

The order of letters is different for each disk, scrambled randomly. Each disk has an unique number and a hole in its center that allows it to be stacked on an axle. The disks can be moved on the axle in any order desired, and can also be removed. The order of the disks is known as the cipher key.

The Jefferson disk had 36 disks that could spell a message. The disks are placed on the axle, and then the sender rotates each disk up and down until a message is spelled out on a row. For example, one row could spell out: The murderer is Mr. X.

Then, the sender would have to look at one of the other rows, which will contain a message that is complete gibberish. He copies down this message, and gives it to the recipient, the person who he wants to break the code.

The recipient then rotate the disks until they spell out the encrypted message on one row, the gibberish message, and then looks through all the rows until he finds the plaintext message: The murderer is Mr. X.