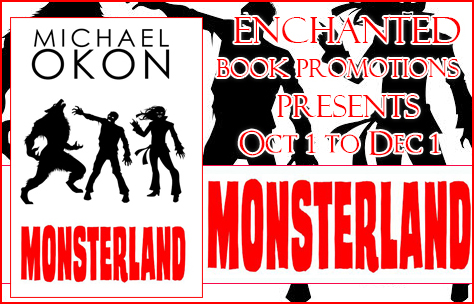 I was binge watching a classic movie marathon with my son. You know, the good ones, The Goonies, Gremlins, Back to the Future, Jurassic Park, etc…. I have always wanted to write a monster book but couldn’t settle on which monster I wanted to pursue. It was while watching all these movies, that I came up with the idea, why isn’t there a theme park with zombies. I called my brother immediately and told him my idea. He said, no – it has to be a theme park with werewolves, vampires AND zombies. I started beating out the story that night.

I re-read the story a hundred times. No kidding. I ask my wife, my mom and couple beta readers to reread the manuscript. They give me feedback and I implement their changes, if I agree with them.

No, however this is my first published book. I was writing and self-publishing under a few different alias – Michael Samuels and Michael Phillip Cash. Then Monsterland got picked up in a two-book publishing deal and my attorney advised me to use my real name – Michael Okon.

Oh yeah. I make a vision board every year. So far everything I’ve ever put on it comes true. For 2017, I asked for hundreds of things, specifically a movie deal.  So far, my career looks like its heading in that direction. Only time will tell.

Monsterland 2 is coming out on my 40th birthday, May 26, 2018. I’m knee deep in Monsterland 3. I’ve already started beating out the stories for Monsterland 4 & 5.  Its seem I’m going to be writing about monsters for the foreseeable future.