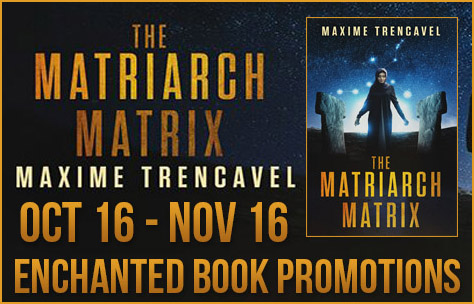 In primary school at age 8. We were assigned to write a fiction story. I loved Horatio Hornblower stories, so I started writing my own version. Epic length of course, which meant it was never finished within the time of the assignment. I excelled in creative writing through secondary school, but writing took a back seat after the typical parentteen conversation about jobs and education. STEM took over. Now with the STEM life successfully achieved, I am so happy I can fulfill my childhood aspirations.

With a fortuitous opening in my life, I was blessed with the time to chase what I once loved. I found utterly intriguing the questions of who built the 12,000 year old monolithic site, Gobekli Tepe, was this a religious sanctuary, and what happened to the builders that I began imagining the story.

The story started as a SciFi Action Adventure. But it took a major turn as a secondary character, a Kurdish woman meant to guide the heroes to Gobekli Tepe, became the primary character. And as I research the Kurds, their centuries of oppression and genocide, and the plight of Kurdish women, I became so compelled that I changed the story line to focus on Zara Khatum – a woman who suffered great tragedy, who held on to sanity through her faith, and who was pitted against everything she believed in to fulfill the destined words and vision of the founding matriarch from Gobekli Tepe.

But the inspiration to complete this epic came from the words of a 22 year old beta reader from Germany: “I would actually like to extend my gratitude. I can’t explain how touching it has been to read about a character like Zara. I think it sends a really strong message home that people seem to really forget. We can all be subject to rape. The world isn’t pretty. And it doesn’t matter how strong you are. But through everything, Zara is so incredibly beautiful. I think that’s important. Whether she agrees or not, she’s a stronger person for everything she’s been through. Thank you for not writing her as some typical rape victim. Thank you for creating something so much more powerful.”

What the portrayal of Zara did for her as a person gave me the conviction to bring this story to market.

I was surprised at how long the editing of a book takes. But quality cannot be rushed. The second draft was completed in three months. The editing took another nine months. I found a veteran editor who specialized in indies and who was a “gentle” commentator. That is, she didn’t make you feel stupid or inadequate through her remarks. This book’s
story was so atypical in that it did not follow rules of any one genre, but utilized the “tools” as needed from many genres to craft the story. I found that typical development editors may not have been suited to help bring such a cross-genre story forward.

As a veteran marketer, I believe in listening to the customer. So I used one round of alpha readers and three rounds of beta readers to help guide the editing process. Each round took three weeks to get feedback. Three weeks for me to emotionally and cognitively assimilate, rationalize, then formulate how to address the feedback. Another four to six weeks to re-pen a new draft followed by four to six weeks of my editor reshaping what I gave her. I also brought in a Kurdish author/editor to advise on the cultural aspects of Zara, her family, and her world. I love that the reviews thus far have not criticized the craft of the book which I believe is a result of this long and involved editing process.

Bringing this book to market was my primary goal. The manuscript came out of proof reading in the beginning of the summer. And it took the whole summer for all of the production aspects of the book to be performed and completed. As much as I wanted the book to be on the market earlier, I let each expert along the way take their time to make a quality product. Over the summer I read books that would help me craft the sequel as my secondary goal was to get the sequel completed.

Last February as the sixth draft went into the second round of beta reader review, I naively thought my manuscript was close to publication ready. So I began to sketch out the sequel. As history tells, the feedback from that second round said there were significant areas that needed to be re-crafted. But having that sequel sketched out helped me in the re-crafting process and set up the bases for the sequel in this first book. I have most of the second book’s synopsis drafted and will meet with my alpha readers shortly. I hope to have a draft ready for my editor by end-of-year and ready to go to first round of beta readers by mid-winter.

The Matriarch Matrix – A speculative fiction novel of origins, faith, passion, and the pursuit of peace.

The past foretells her future…

What does it take to change a loving child of peace into an assassin for a dangerous and powerful oligarch? Zara Khatum knows. Once a fighter for her Kurdish people, the memory of the atrocities inflicted by her captors has Zara seeking one thing: vengeance. But the voices of the ancients call to Zara. In the past, in another life, she knew the secrets of the artifact…

She is Nanshe, revered matriarch of the family she led away from the monsters of the north. In the land that would one day mark the treacherous border between Turkey and Syria, she created the temples at Gobleki Tepe and founded a dynasty, heirs to a powerful object. For millennia, Nanshe’s descendants have passed down the legend of the artifact: “The object can save. But only a man and woman together can guide the salvation of others.”

By fate or destiny, Zara is thrown in with Peter Gollinger, a quirky Californian from the other side of the world and the other side of everything she believes. But he, too, is heeding the voices of his ancestors. Joined by Jean-Paul, a former Jesuit priest, these three people—from wildly different religions and cultures—must find a way to work together to solve a twelve thousand-year-old mystery of the powerful object that spawned a faith. The world teeters on the precipice of war. The outcome depends on them. And one of them is living a lie.

The Matriarch Matrix is a rich and deeply layered epic story – a spiritual odyssey with a heartbeat of an action adventure. It may make you think, ponder, reflect upon where we came from and where we are going. It blends our past with a speculative future of things that are not so far-fetched. It blends the drama, the comedy, the romance, the tragedy of three protagonists with different cultures, traditions, and beliefs – a Sufi woman, a Jesuit priest, and an alien origin believing atheist. Their journeys separately and together will be a test of their respective faiths and their inner search for personal and family redemption.

Maxime has been scribbling stories since grade school from adventure epics to morality plays. Blessed with living in multicultural pluralistic settings and having earned degrees in science and marketing, Maxime has worked in business and sports, traveling to countries across five continents and learning about cultures, traditions, and the importance of tolerance and understanding. Maxime’s debut novel was written and edited in diﬀerent locations in Belgium, including the Turkish and Kurdish neighborhoods of Brussels, in South America, and on the two coasts of the United States.

Get “The Matriarch Matrix” on  Amazon