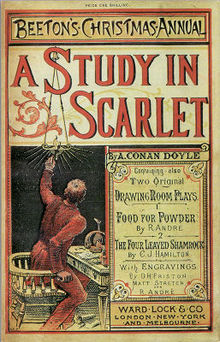 In “A Study in Scarlet”, Dr. Watson (the narrator) meets Sherlock Holmes, who reveals he’s a consulting detective. They first meet in a laboratory where Holmes is experimenting and explains to Watson the importance of bloodstains as evidence in criminal trials. In A Study of Shifters, Marisol too explains the importance of bloodstains in crime scenes.

Watson is amazed by how perceptive Holmes is, considering the consulting detective notices right away that Watson served in Afghanistan, without the doctor telling him.

Holmes is asked to consult on a murder case, but he’s reluctant to do so. Watson urges him to reconsider, and then Holmes invites Watson along. While Watson is on the sidelines, more a spectator than an active participant in solving the crime, and most of the credit goes to Holmes, he does offer some helpful suggestions that help Holmes along the way.