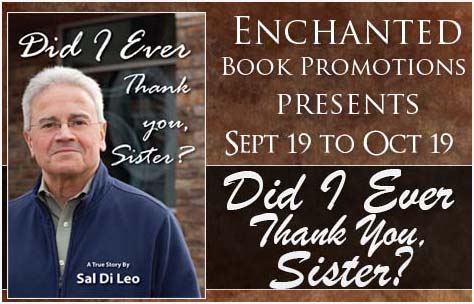 I’m interviewing Sal Di Leo, author of nonfiction “Did I Ever Thank You, Sister?” today. Welcome to my blog!

When or why did you decide to write your book?

“This was my first and only book. I wasn’t intending on writing a book when I started out, I just wanted to write down what had happened in my life, so I could finally face my past and go forward. It was a very healing process, to say the least.”
What inspired you to write your book?

“It was a phone call from a Newspaper reporter from Joliet, Illinois, who had found me via an old Nun who raised me in the orphanage in Joliet. He was doing a story about the 100th Anniversary of the Founding Of The Guardian Angel Home and was looking for people who had been there back when it was still an orphanage. He wanted to know what I thought of my experience, now it had been years since I left. He and I talked about an hour and when we were through, he suggested I write down my life story.” Several years later, I did.

“Since I was not a professional writer by trade, I asked my 17 years old daughter to help me with editing. She was in a program with the Minneapolis Star Tribune Newspaper for high school students and was focusing on Journalism. She did the only editing at the time. She was good at it. It was difficult however for her to read some of the things I put myself and my family through in my earlier years that she had no idea about. She later on attending the University Of Missouri and received her Undergraduate and Masters in Journalism there.”

What was the most challenging part about writing this book for you?

“Going back into my past and really putting down what had happened, without sugar coating it. I cried a lot”

“Yes. I truly had no intention of actually seeing this become a book. It just turned out to be one as people I trusted read it and encouraged me to get it published. The rest is history.”

“I am working on my second book, this time with a purpose other than just trying to heal. This book has been on my mind for about 10 years now. I am almost finished with it.”

Title: Did I Ever Thank You Sister?

Sal Di Leo returns after 30 years to the Catholic orphanage outside Chicago that he and his siblings called home in 1963. This is the beginning of a journey of discovery and remembrance as Sal is forced to reconstruct his life as it really happened, including some of his most difficult years at Boys Town in Nebraska. As an adult, Sal tried to rise above his turbulent past in an aggressive quest for power and money. Successes soon led to failures. Eventually, a wise friend convinces Sal to go back to his roots and look for the good experiences and valuable lessons he learned as a nine-year-old orphan.

An entrepreneur who has successfully tackled many challenges in business and in life, Sal volunteers much of his time serving those in need. With his family, he founded St. Francis Lodge, a free retreat center where nuns, priests and others can reflect and rest to enhance their lives and work. The State Fish Art contest, which he started in Minnesota to help kids learn about conservation through art, is now offered in all 50 states and 12 countries. Sal has been actively involved with Rotary and the Lions Club, and he has spoken to service clubs around the United States about his life and the importance of gratitude. His self-published memoir, Did I Ever Thank You, Sister?, rooted in his childhood experiences in a Catholic orphanage, is available worldwide. The proud father of two adult daughters who have successfully left the nest, Sal has been married to his lovely wife Beth for more than 30 years. A longtime resident of Minneapolis, he is a 1977 graduate of the University of Nebraska, Lincoln.