The Adventures of Marisol Holmes: All About Otters 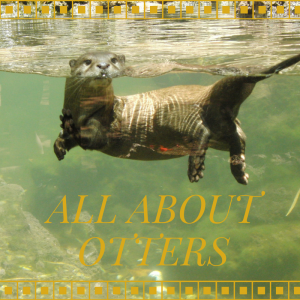 One of the main characters in The Adventures of Marisol Holmes: A Study in Shifters, Wyatt Johnson, is an otter shifter. Now, otters look adorable, but they’re much more to otters than meets the eye–and the same counts for Wyatt. Let’s learn a bit more about our otter friends. Otters have long, slim bodies and short limbs. They have powerful webbed feet which they use to swim, and seal-like abilities which permit them to hold their breath underwater. They have sharp claws on their feet and long, muscular tails. There are actually thirteen species of otters.

For most otters, fish is the number one item on their menu. Sometimes they also add in frogs, crayfish and crabs. Otters are active hunters, chasing prey in the water or searching the beds of rivers and lakes. Otters require a lot of food: European otters must eat 15% of their body weight each day. Sea otters need even more, 20-25%, depending on the temperature of the water. Most species hunt for three to five hours each day, and nursing mothers even hunt for eight hours each day.

Did you know an otter’s den is actually called a holt or couch? I had no idea! Otters are popular animals in Japanese folklore. In Japanse folklore, otters fool humans the same way foxes do (think of the kitsune). They can apparently, according to the stories, shapeshift into beautiful women. They will answer questions in a crytical way. However, there’s also a story of an otter shifting into a beautiful woman, and luring males to their deaths by eating them. Yikes! Turns out these cute animals are quite dangerous after all, at least in folklore.